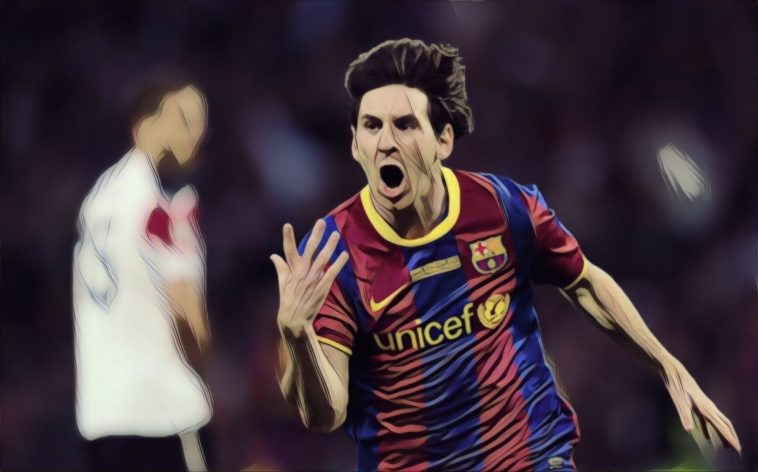 The forward became the first player in history to score for two different sides in the same tournament following a change in the rules which previously cup tied players moving between clubs in the same competition. Having earlier burst onto the scene with an eight-goal haul in the group stages for Red Bull Salzburg, he has continued his stellar form following his mid-season move to the Bundesliga.

Haaland is now the joint-leading goalscorer in this season’s tournament alongside Bayern Munich’s Robert Lewandowski, the 19-year-old’s record standing at a hugely impressive ten goals in just seven appearances. The Norwegian still has some way to go to catch the most prolific goalscorers in European history, however.

The five players with the most goals in a single Champions League season:

Long before the era of dominance between Lionel Messi and Cristiano Ronaldo began, former Manchester United forward Van Nistelrooy was amongst the most feared forwards in European football.

The Netherlands international finished as the Champions League’s top scorer three times in the space of four seasons during a prolific spell under Sir Alex Ferguson at Old Trafford, with his best haul seeing him score 12 times during the 2002/03 season.

Van Nistelrooy scored ten times across the previous format of two group stages, before scoring in both legs of the club’s eventual quarter-final defeat to Real Madrid, part of a prolific campaign that saw him score 44 goals in all competitions.

The Dutchman’s fifth-highest haul of 12 has been matched on five other occasions, Ronaldo and Messi achieving the feat twice each in addition to Mario Gomez scoring 12 times when Bayern Munich finished runners-up in 2011/12.

The five teenagers to score a Champions League hat-trick

Regarded by many as the greatest footballer of all-time, Barcelona superstar Messi has produced some mesmerising displays on the biggest stage in club football.

The Argentina international is the second-highest scorer in the competition and has lifted the trophy on four occasions, twice scoring in finals and finishing as the Champions League’s leading scorer on six separate seasons.

Amongst those campaigns was a personal best haul of 14 goals during the 2011/12 season, though Barcelona’s defence of the title they won the previous season ended at the semi-final stage with defeat to eventual winners Chelsea.

The greatest goalscorer in the history of the Champions League, Ronaldo has made prolific campaigns at the highest level of European football routine over an astonishing career.

Ronaldo hit 15 goals during a season that would see him lift the trophy in the final season of his spell at Real Madrid, winning the Champions League for a fourth time with the Spanish side and for a fifth time on a personal basis.

The Portuguese’s haul includes one of the tournament’s greatest ever goals with an overhead kick in Turin against Juventus, before netting a penalty in the eighth minute of stoppage-time to seal Real’s progress past the Italian giants in the second leg of their quarter-final tie at the Bernabeu.

Ronaldo lifted Europe’s biggest prize for a third time in his career during the 2015/16 season with Real Madrid, the first of three consecutive successes as the Spanish giants became the first – and so far only – team to defend the trophy in the Champions League era.

The forward began the campaign with a blistering run of form in the group stage, netting a hat-trick on matchday one against Shakhtar Donetsk before racking up 11 goals in just six games, finishing the group with a four-goal haul in an 8-0 thrashing of Malmo in Madrid.

After scoring in both legs of the last-16 against Roma he would save Real’s place in the tournament in dramatic fashion, scoring a hat-trick against Wolfsburg in the quarter-finals to overturn a two-goal first leg deficit.

Ronaldo finished the campaign with 16 goals, whilst he would also score the decisive penalty in their final shoot-out success over city rivals Atletico Madrid in Milan.

The Champions League’s most prolific ever season typically belongs to one man, the Portuguese superstar netting 17 times as Real Madrid secured their fabled La Decima triumph in 2014.

Ronaldo would score nine times throughout the group stages before scoring in each knock-out stage, including a devastating two-goal performance as Bayern Munich were thrashed 4-0 at the Allianz Arena in the semi-finals.

The forward would also seal the club’s final success over Atletico Madrid with a late penalty in extra-time, Real being crowned champions of Europe for the tenth time in their illustrious history.

Ronaldo’s 17-goal campaign remains the benchmark, part of a record that has seen one of the greatest footballers to grace the game score 128 times at Champions League level.

Read: The five favourites to win the PFA Player of the Year award

See Also: The Everton legend who subbed himself on in an FA Cup semi-final