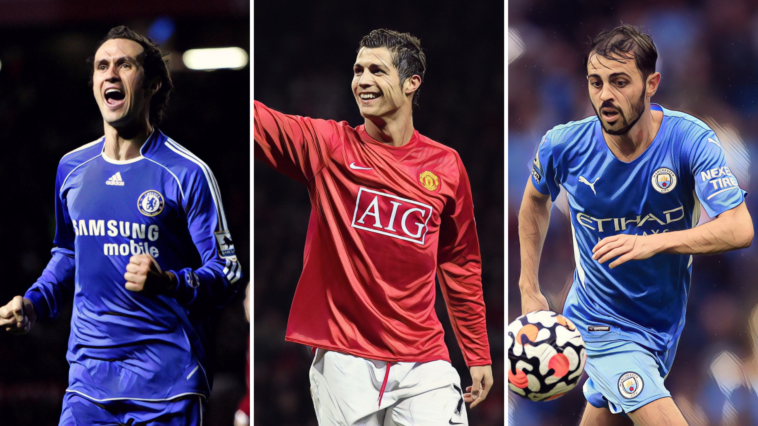 English football’s top division has been home to some brilliant Portuguese players in recent history, with some of the nation’s greatest players having represented Premier League clubs.

Cristiano Ronaldo’s move to Manchester United this summer has seen Portugal’s finest export return for a second spell in the Premier League, the five-time Ballon d’Or winner re-joining the Red Devils more than a decade after his world-record departure.

Ronaldo is no doubt a certainty to feature in an all-time Portuguese Premier League XI, but which of the star’s compatriots have made the cut?

Wolves have acquired an ever-growing Portuguese contingent in recent seasons, with the arrival of manager Nuno Espirito Santo in 2017 resulting in an influx of players from the Iberian Peninsula.

Amongst those imports was Rui Patricio, the arrival of the experienced goalkeeper from Sporting Lisbon viewed as a coup for Wolves following their promotion to the Premier League in 2018.

The goalkeeper – part of Portugal’s victorious squad at Euro 2016 – made 127 appearances across three seasons at Molineux before joining Jose Mourinho’s Roma revolution in 2021.

Jose Mourinho’s arrival as Chelsea manager in 2004 saw the ‘Special One’ turn to familiar faces, securing the signing of Paulo Ferreira from former club Porto.

Ferreira had helped the Portuguese side to Champions League success the previous season and soon played a prominent role in Chelsea’s search of silverware, winning back-to-back league titles across his first two seasons in the capital.

The right-back lost his place as an automatic selection following the arrival of Branislav Ivanovic, but proved a dependable performer throughout his time with the west Londoners.

He remained at Stamford Bridge for nine seasons and won 11 major honours, including three league titles and the Champions League.

Carvalho was the second of Porto’s Portuguese contingent to follow Mourinho to Chelsea, with the centre-back having emerged as one of Europe’s most elegant defenders at the The Estádio do Dragão.

Carvalho formed an instant understanding with John Terry as Chelsea cantered to a first league title in 50 years during the 2004/05 season, conceding an all-time Premier League low of just 15 goals.

A rock at the 💙 of @ChelseaFC's defence…

The defender’s composure and quality in possession complimented the lion-hearted approach of Terry, with the duo forming one of the division’s best centre-back pairings across six seasons in tandem at Stamford Bridge.

Carvalho won three league titles with the Blues, before reuniting with Mourinho once more at Real Madrid.

Ruben Dias is still in the infancy of his Premier League career, but the defender’s instant impact at Manchester City makes him a certain inclusion in our Portuguese XI.

Pep Guardiola’s search for a successor to Vincent Kompany saw him turn to the Benfica man, securing Dias in a club-record deal worth £65m deal in 2020.

Dias wasted little time in making an impression as the centre-back’s arrival transformed City’s defensive weakness into a position of strength, with Guardiola’s side winning the 2020/21 Premier League title in comfortable fashion.

Acting as the defensive general of the side, his performances saw Dias named as the FWA Footballer of the Year, becoming the first defender to win the award since Liverpool’s Steve Nicol  in 1989.

Another member of Manchester City’s title-winning side, Joao Cancelo bounced back from an indifferent start to life at the Etihad to become an integral figure in the club’s success.

The former Juventus star is comfortable on either flank and has developed into one of the Premier League’s most effective full-backs, with Cancelo at ease in possession and a creative force when venturing forward.

The 27-year-old’s tactical intelligence has allowed him to execute Guardiola’s demands, often tucking inside to create midfield overloads in addition to bursting forward on the overlap.

Wolves’ signing of Ruben Neves stunned European football, with the midfielder – the Champions League’s youngest ever captain at Porto – signing for the second-tier side to aid their push for promotion.

Neves helped lead Wolves to the Premier League before securing Europa League qualification, the midfielder having been a central figure in the club’s return to, and rise, in England’s top tier.

The Portugal international is tenacious defensively and boasts a fine passing range from deep, whilst Neves has compiled a catalogue of stunning strikes having developed a penchant for the spectacular from distance.

Some of the Premier League’s biggest sides have circled in recent transfer windows, with Neves possessing all the attributes to thrive at the highest level.

Bernardo Silva has not always claimed the headlines at Manchester City in recent seasons, but there is no disputing the midfielder’s role in the club’s modern successes.

Signed from the exciting Monaco side that reached the 2016/17 Champions League semi-finals, Silva’s mix of lung-busting energy and technical brilliance has made him a firm favourite at the Etihad.

He formed part of the side that reached a record 100 points in the Premier League during his debut season, before being named as City’s Player of the Season following an unprecedented domestic treble in 2018/19.

Silva has since struggled to replicate the brilliance he reached that season, but continues to be the club’s multi-purpose midfielder for any occasion despite interest in an exit from Eastlands.

Manchester United‘s signing of Bruno Fernandes has had a transformative impact upon the club’s fortunes, with the midfielder instantly assuming the mantle as the Red Devils’ go-to player.

His form continued during a first full season which saw him break Frank Lampard’s goalscoring record for a Premier League midfielder in a calendar year, before being named as the Red Devils’ Player of the Season after scoring 28 goals in all competitions.

Most Premier League goals and assists combined since Bruno Fernandes made his debut in the competition:

No player created more chances than Fernandes in the Premier League last season and the 27-year-old has played an instrumental role in turning a struggling side into potential title contenders.

Nani’s arrival at Manchester United was greeted amid much fanfare, with the winger soon becoming a crowd favourite given his repertoire of tricks, flicks and dazzling displays.

Consistency perhaps prevented him from reaching greater heights, but Nani was undoubtedly a nightmarish prospect for opposition full-backs when hurtling forward in possession.

Diogo Jota continues to go from strength to strength with the forward having become an increasingly important figure at Liverpool.

Jota arrived in English football at Wolves and contributed to the club’s promotion and consolidation in the top tier, scoring 44 goals across three seasons at Molineux before a £40m move to Anfield.

Jota’s insatiable work-rate, versatility, and sharp-shooting have made him a firm favourite at Liverpool, with his record of a goal every 130 minutes for the Reds the third-best minute per goal ratio in the club’s history.

Portugal’s greatest ever footballer and one of the finest of all time, Cristiano Ronaldo’s career has been one of countless records and almost unrivalled success.

Ronaldo arrived at Manchester United as a raw teenager in 2003, before evolving over the course of six seasons in the Premier League to become arguably the world’s best player.

His performances inspired the Red Devils to three successive league titles between 2007 and 2009, the second of which came alongside the Champions League following a 42-goal campaign for Ronaldo.

That season saw Ronaldo claim the first of his five Ballon d’Or accolades, his towering header in the Champions League final against Chelsea perhaps the most important of his 118 goals scored for the club.

He signed for Real Madrid in an £80m world record deal in 2009 and became the Spanish giant’s all-time record scorer, before a prolific three-year spell at Juventus added further weight to his ever-growing legend.

Ronaldo returned to the Premier League this summer as the all-time leading scorer in the history of Real Madrid, the Champions League, and international football, with fans eagerly awaiting what the second coming of a football great can deliver.