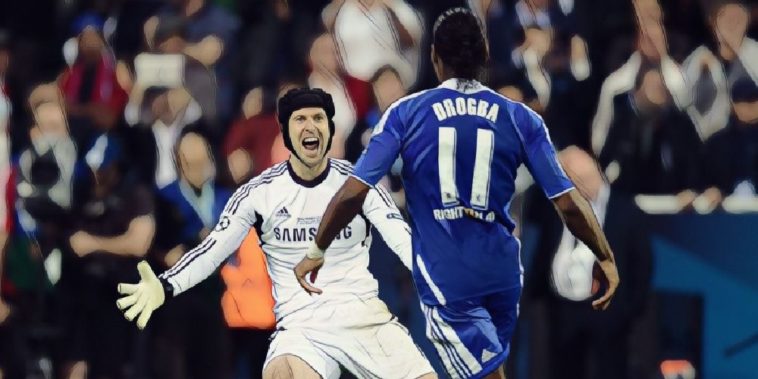 Petr Cech has opened up on his memories from the 2012 Champions League final as Chelsea prepare to renew rivalries with Bayern Munich tonight.

Frank Lampard’s side welcome the German giants to Stamford Bridge tonight in a rematch of the 2012 final, Chelsea lifting the Champions League for the first time in their history after penalty shoot-out success at Bayern’s Allianz Arena in Munich.

Cech was amongst the Blues’s stand-out stars during a historic night in Germany, saving spot-kicks from Ivica Olic and Bastian Schweinsteiger in the shoot-out, and ahead of tonight’s clash the former Blues goalkeeper has now relived the ‘unique moment’ the club were crowned champions of Europe.

“The keeper stands on the side of the pitch for the shootouts. So for the winning penalty I saw the ball, and I saw Manuel Neuer diving to this side,” Cech told ChelseaTV.

“I saw his head coming this way, and then at the back I saw the ball going in the far corner. That was the moment when you realised the Champions League was won.

“I saw Didier running towards me and I went directly to meet him. For 20 seconds we didn’t know what to do – because of the accomplishment, because we had been chasing the trophy for so long. It was a unique moment.”

In addition to his two saves in the shoot-out, Cech would also deny Arjen Robben from the penalty spot in extra-time to keep the game level, though the former Czech Republic international insists he has little memory of his vital stop to deny the Dutchman.

“Sometimes when you watch movies and they slow down and freeze – that happened the same way. The ball became really big,” he said.

“I was concentrating on what he was going to do – and the rest stayed a complete blank, my focus was only on that. The moment froze, the ball disappeared.”

Cech admits he had a second of doubt as Manuel Neuer came close to saving the forward’s powerful header, though the German’s efforts were in vain as Roberto Di Matteo’s side found a vital late equaliser.

“When I saw the ball coming in I was sure that this would open up the chance to win the game,” Cech said.

“I remember seeing Neuer going very close to the ball – I thought he might get there for a second, and I thought the chance was gone. He got a touch to it but not enough to keep it out.”