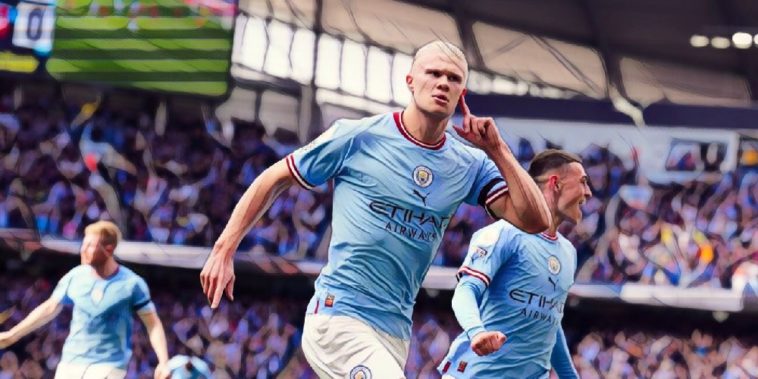 Pep Guardiola said that he is still looking for his side to be ‘better’ despite hitting Manchester United for six in the 188th Manchester derby.

Despite coming into the game without the likes of John Stones, Ruben Dias and Rodri, Manchester City raced out of the blocks to take the lead within the first eight minutes as local lad Phil Foden netted his first-ever Manchester derby strike.

Manchester United looked a shadow of the side that had shown plenty of improvement in recent matches and consistently conceded possession to the hosts, who looked to get forward at every opportunity.

Having scored 14 times in his first nine games for Man City, goal machine Erling Haaland added two more to his tally, before Foden secured his brace to give City a 4-0 half-time advantage.

£80m summer signing Antony pulled one back just after the break for United, before Haaland and Foden both completed their hat-tricks to open up a 6-1 lead.

Second-half substitute Anthony Martial netted twice late on to marginally reduce United’s blushes on what was otherwise a chastening afternoon, but despite the resounding victory, Pep Guardiola admitted that there are areas that his side still need to improve.

“It was really good [in the first half],” he told Sky Sports. “We scored four goals and could have scored more. After half-time it was more difficult.

“It was a great victory, a great game, everyone was happy in the stadium and we enjoy it against our rivals. It was a good afternoon for us.

“In general it was really good how aggressive we were but of course when they have Bruno Fernandes and Christian Eriksen they have quality. We were aware of the spaces and our players up front made the difference in the first half.

“We can win or lose but there are many things we can do better. Some players were not good today so they have to improve.

“Perfection doesn’t exist, it’s impossible. But we must try to look there. We did good, we can do better, many, many players had sloppy passes. This is not good. We have to be more consistent. In some areas we were still not good.”

Guardiola was delighted for Foden after he netted his 49th, 50th and 51st goals in City colours.

“His desire, how he runs, is the main thing. He deserves to play every time and then he has quality. He is a young player and it is a reality. He deserves everything.”

As for Haaland, he now has nine goals in 14 goals and three assists in just eight Premier League outings, and even the Catalan admitted that the striker’s numbers in front of goal are ‘scary’.

“It is. The numbers speak for himself. He has done this before here. It is not our way. Always we try to help him in our environment. We have this incredible sense that he always looks starving and is so competitive. The numbers are scary, honestly.

“He sees 10 players running without the ball with effort for each other so he wants to do it. They visualise it, they see it. It’s why we have success in the last few years. Behind it is effort and desire to do it.”