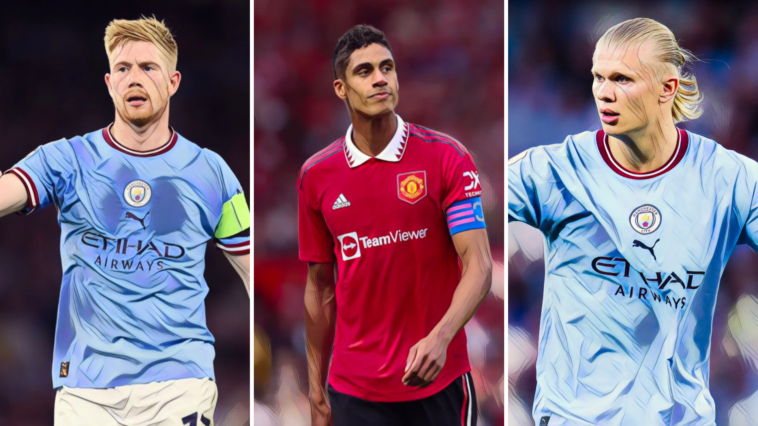 Manchester City take on Manchester United this weekend in one of the most eagerly anticipated dates on the Premier League calendar.

What was once a one-sided rivalry in United’s favour has been transformed across the past decade, with the shift in power seeing City overtake their neighbours to become the Premier League’s dominant force.

City outclassed their cross-town rivals in both fixtures last season, but United will arrive at the Etihad with increased confidence after an upturn in form under new manager Erik ten Hag.

Ahead of their showdown on Sunday, we’ve picked our Manchester Derby combined XI.

Ederson’s unique brand of goalkeeping has been at the forefront of City’s success in recent seasons, with his excellence with the ball at his feet unrivalled among his shot-stopping peers.

The Brazilian’s contribution to City’s possession-based approach can not be understated, in which he provides an outlet when under pressure and the passing range to move from back to front with accuracy and pace.

You shall not pass 🙅 pic.twitter.com/ehJDYLDWnG

The success of Guardiola’s defensive system has also allowed the goalkeeper to collect clean sheets and individual honours. He has won three Premier League Golden Glove awards, one less than the record held jointly by Joe Hart and Petr Cech, and is the current leader again this season with four shut-outs to date.

Kyle Walker arrived at Manchester City from Tottenham as a flying full-back, with his game built on raw speed and athleticism when marauding down the right flank. That pace remains an asset to City both in attack and defence, but the defender’s improvement tactically and technically has been evident under Guardiola’s tutelage.

His recovery pace allows City to operate with a high defensive line and the asymmetric balance he brings grants freedom for fellow full-back Joao Cancelo to take on a more advanced role.

Ruben Dias wasted no time in cementing his place among City’s fan favourites, after a debut season in 2020/21 which saw the centre-back named as the FWA Footballer of the Year.

Last season saw Dias win a second successive Premier League title, with City a better team with his authoritative presence at the heart of their defence. Dias ranks third in the division for aerial duels won this season, while only John Stones can boast a better pass accuracy than the Portugal international.

In a short space of time has has evolved from a promising talent into one of the Premier League’s best centre-backs, having brought much-needed leadership to Guardiola’s backline. His desire to improve and the demands he places on those around him have made Dias an integral figure in City’s winning machine.

Raphael Varane’s pedigree is without question and Manchester United fans have felt his influence on the team in recent weeks. Varane signed amid much fanfare last summer, after a decorated career at Real Madrid which included four Champions League winners’ medals.

Fitness problems plagued the debut campaign of the World Cup winner, but United were no doubt a better team with the Frenchman present. This season he has formed an encouraging understanding with Lisandro Martinez, with his aura of cool a fine compliment to the combative aggression of the Argentine.

The best full-back in European football?

There’s a completeness to Cancelo’s game that makes pigeon-holing him as a full-back appear unfair, such is his influence in a free-floating role that begins from the backline.

In the Champions League alone, Cancelo has been directly involved in eight goals since the start of last season, more than any other defender.

Comfortable on either flank, quick, and boasting a technique to rival the best playmakers in the Premier League, he is the perfect full-back for a Pep Guardiola team.

Rodri has evolved into the ideal midfield metronome of the Manchester City side, a conduit of class and composure and one of Europe’s elite in his position.

No midfielder in the Premier League can better his pass accuracy of 92.8% so far this season, a continuation of a campaign last season in which he was among the driving forces of City’s title success,

Last season the Spain international won possession in the midfield third per game more times than any other midfielder (5.2), while he ranked fourth – and second among central midfielders – for accurate long balls per game (5.5). His range of passing and press-resistant calm are central to the success of a team who often monopolise possession.

Christian Eriksen is emerging as one of the signings of the season at Manchester United. It should come as little surprise given his past pedigree, but the Denmark international has been the catalyst behind the Red Devils’ recent upturn.

Eriksen has revelled in a deeper midfield role, in which his ability to move the ball forward quickly has brought the best out of those ahead of him. That was evident in the win over Arsenal this month, as his quick-thinking and accuracy fed Bruno Fernandes, who in turn teed up Marcus Rashford’s first goal.

A wonderful technician, he was outstanding on international duty this week as Denmark upset world champions France. Against a midfield containing Aurélien Tchouaméni and Eduardo Camavinga he dominated, creating eight games. That total was the most any player has recorded in the 2022/23 Nations League and just one less than the entire French side combined.

A reminder – he cost the Red Devils nothing this summer.

Kevin De Bruyne’s inclusion will spark little debate with the brilliant Belgian a shoo-in for this combined team.

Arguably the most influential footballer in the Premier League, De Bruyne has set extraordinary standards in recent seasons to emerge as one of the division’s all-time greats.

The two-time PFA Player of the Year has began the season in fine form, registering six assists in just six Premier League starts to date. The Premier League assist record for a single season that he shares with Thierry Henry (20) will be in De Bruyne’s sights this season and, aided by the arrival of Erling Haaland, could fall before the end of the campaign.

Bernardo Silva is moved out to the right flank to accommodate our talented midfield group, with teammate Riyad Mahrez out of form and favour, and Antony still in the infancy of his Manchester United career.

Bernardo has been a manager’s dream for Pep Guardiola since arriving from Monaco in 2017, providing a brilliant blend of work-rate and wizardry from a number of midfield roles.

City fended off interest in the Portugal international during the summer and will be a better team for it, with Bernardo often an indefatigable delight.

Manchester City’s homegrown hero will have his sights on a derby day impact this weekend, having failed to score in five previous Manchester Derby appearances.

The Stockport-born schemer came through the ranks at City and has fulfilled his dreams as a boyhood blue, having won four Premier League titles – among nine major honours – at the age of 22.

Three points on the road 💪🏻 Felt so good to get a goal! Thanks for your support as always! 👊🏻🔵 pic.twitter.com/LKpVCGpa5j

Foden is a fantastic footballer who is comfortable in small pockets of space, possessing a silky street-inspired style that has been lacking in English football for some time. He has already made 179 appearances in all competitions for City, with a return of 83 goals and assists.

Arguably the first name on the team sheet, Erling Haaland’s impact this season has been the talk of the Premier League.

The star signing of the summer and lived up to – and perhaps even exceeded – all expectations, following a phenomenal start at City that has seen the Norwegian plunder 14 goals in just ten games.

What Haaland is doing is ridiculous 😳 pic.twitter.com/EUYt1ZPfjs

A raw mix of pace, power and ruthlessness when presented with opportunities around goal, no goalscoring milestone appears safe if the 22-year-old can continue on his current trajectory.

Read – Erling Haaland: The goal-scoring freak who is subverting the norms and stretching our belief