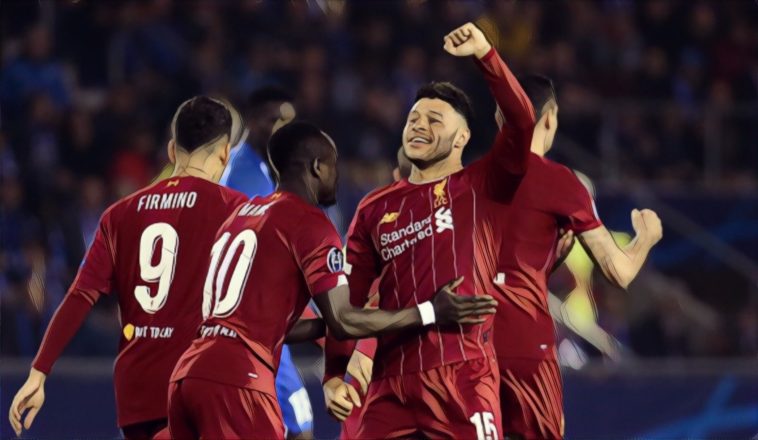 Liverpool move up to second place in Group E of the Champions League following their 4-1 win over Genk.

The narrative coming into this game was all about Liverpool‘s poor away form in Europe of late. Last season they failed to win any of their away fixtures in the group stages of the Champions League, and this year they had already lost 2-0 to Napoli at the Stadio San Paolo.

Indeed, before tonight the Reds had won just two of their last seven matches on the road in this competition, although it should be noted those pair of results were not inconsiderable victories over FC Porto and Bayern Munich. Still, this was an opportunity to put this narrative to bed and they did so comprehensively by putting four past their hosts.

In his first Champions League appearance since suffering a serious knee injury against Roma 18 months ago, Alex Oxlade-Chamberlain took just two minutes to open the scoring, drilling his shot goalbound from outside the area.

From that moment, however, Genk looked the more likely to score for the rest of the half. On two occasions the Belgian outfit opened up the visitors right down the gut, but Mbwana Aly Samatta missed his chance while Alisson was forced to save Ebere Paul Onuachu’s effort.

Liverpool had an even closer scare when, in the 27th minute, Genk put the ball in the net. Samatta’s headed finish was subsequently disallowed by the referee for offside, which the VAR confirmed to be the correct decision afterward.

In the end Liverpool had too much class for their opponents, as evidenced by The Ox’s second goal, a sublime chipped finish from the edge of the box that looped over the goalkeeper and in off the crossbar. That was followed up by a gorgeous finish from Sadio Mane, before Mo Salah displayed ridiculous close control and skill to carve out a chance in front of goal for the fourth.

Genk got the goal their play deserved after substitute Stephen Odey scored in the 88th minute. The consolation came about as a result of Dejan Lovren losing possession after needlessly dallying with the ball on the touchline before Dieumerci Ndongala shimmied his way into the box to deliver the assist.

Oxlade-Chamberlain was naturally delighted with his performance after the game, but was also just happy to be able to take to the pitch once again.

“I don’t know about the Champions League missing me but I’ve definitely missed it! It was nice to be back out there,” he told BT Sport.

“It’s a special tournament to play in. It was great to see the boys do so well last year, being on the bench at the end and watching the boys bring it home.

“It’s nice to be back in the starting line-up and to get a couple of goals is a bonus. But we’ve got to be better if we want to go further in the tournament.”

Manager Jurgen Klopp said it was “a big step” for the 26-year-old in his efforts to become a regular starter again, but was also happy to get in and out of Belgium with all three points.

“There were good moments. The start was brilliant, we were kind of fluent and asked them a lot of questions but then we started – I’m not sure why – to lose patience and some easy balls. But all four goals were brilliant and we had chances to score more. Job done.

“In the years before we would have drawn it, maybe even lost, but all’s OK. It was intense, we needed concentration. Our opponent brought in their tallest player and they did well from the first and second balls. We played with speculation when do we really need to go there? Then they won the second balls. So I didn’t enjoy the game too much, but I enjoyed the result.”

Reading between the lines, the German was not overly delighted with the performance, but was satisfied with the win, their 25th out of the last 30 games, before looking ahead to Tottenham Hotspur on Sunday.

“We’ve just had two away games that were both difficult for different reasons. I don’t know where we are now but I know where we need to be on Sunday.

“It’s a refreshed Tottenham. Of course the second they meet us they’re back on track! But we’re a different team to Red Star Belgrade, just like Tottenham are different to Genk.”

It wasn’t all positive for the Reds though, as the club removed an offensive banner from the away section. The banner depicted Divock Origi’s head on a naked body, alongside the Champions League trophy. In a statement the club said the banner was “completely unacceptable” and that the image “perpetuated a racist stereotype”.

See Also: Dealing with the complicated legacy of a Liverpool ‘hero’