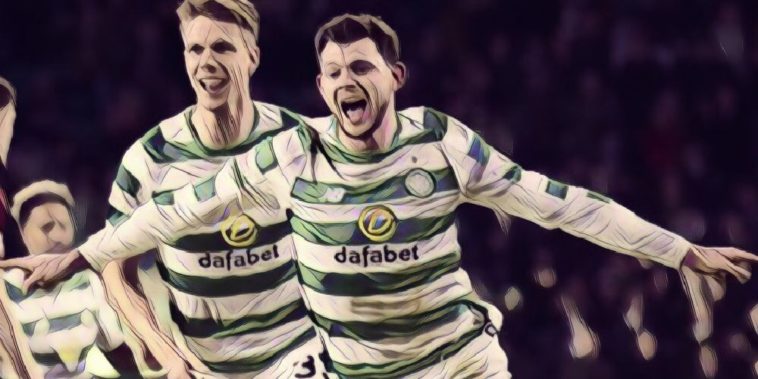 On-loan Celtic winger Oliver Burke has revealed his ‘relief’ at scoring a brace on his debut for the reigning Scottish champions.

The 21-year-old Scotland international joined Brendan Rodgers’ side earlier this month after struggling to make an impact at West Bromwich Albion. He bagged two goals on a dream debut during a 4-0 rout of St Mirren at Celtic Park last night and the youngster was clearly delighted with the impact he made.

“It was a great relief to score,” he told the official Celtic website.

“My main focus was to get the ball in the back of the net and I knew after that I’d get my confidence back and feel at home again. It’s given me a great boost. I’m really happy, happy for the team and now we can focus on the next task in hand.

“It was an amazing feeling to get two goals. We put in a great performance, worked very hard and got a result, so I’m delighted for the team.”

The youngster made just five appearances for the Baggies in the first half of this season, and he is clearly hoping to finally benefit from some regular game time at Celtic, and he looks to carry on from his wonderful start for the Hoops.

“It gives me a lot of confidence when a manager believes in you and is going to play you,” he added. “It gives me confidence to go out there and play for him. It makes you want to give your all. Knowing that I’m going to play football is the main thing for me now, especially at a young age.

“I’ve been starved of football for the past couple of years. That’s all I want to do. I just want to be out there and enjoying myself like tonight. It’s a massive relief for me, an amazing feeling and I feel really happy.”

Burke was also full of praise for Brendan Rodgers, who is on course to land a fourth straight Scottish Premiership title.

“The manager was a massive factor in me coming here. Everyone knows what Brendan Rodgers has done as a manager. It’s amazing, and he’s developed some outstanding talents. They’ve pushed on and gone on to great things.

“I know he’s the right man and I can develop under him. It’s a great team for me as well. My team-mates are a massive help and I feel at home already. It’s really important for me to get my head down and do the best I can.”