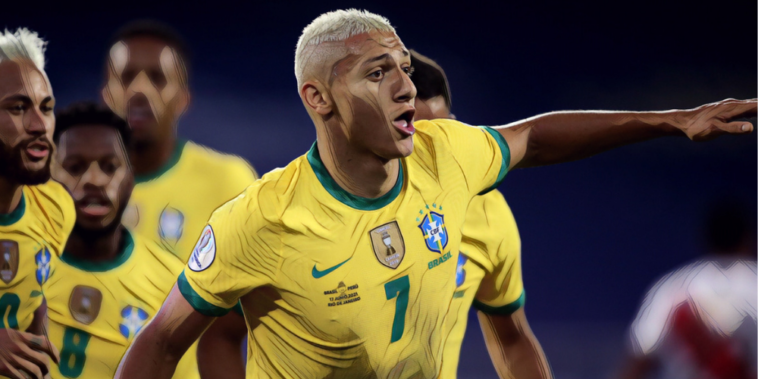 The Olympic Games are set to start next week as nations from across the globe compete in one of sport’s greatest events in Tokyo.

Whilst sports fans will be eagerly anticipating the start of the games, the Olympics will represent a headache for several Premier League managers ahead of the forthcoming 2021/22 campaign.

Several notable names have been called up for the Olympic football tournament, which will conclude just a week before the Premier League’s opening round of fixtures on August 14.

Brazil head into the games as the reigning holders having won the gold medal on home soil in 2016, Neymar scoring the decisive spot-kick as Germany were beaten on penalties in the final.

The South Americans will be without the Paris Saint-Germain superstar this time around, though their side will be spearheaded by Everton’s Richarlison after the Merseyside club reversed their initial decision and granted permission to the forward to compete.

The tournament caps a busy summer for the 24-year-old who formed part of the senior side that reached the final of the Copa America this summer, and Richarlison – who has scored 10 goals in 32 caps for Brazil – will be expected to fire their charge.

Richarlison is one of four Premier League players in Brazil’s squad which also includes Aston Villa midfielder Douglas Luiz and Arsenal defender Gabriel, whilst veteran full-back Dani Alves has been included as one of three overage players.

Burnley boss Sean Dyche will be keeping a close eye on developments at the Olympics this summer, with Chris Wood included in New Zealand’s squad for the games.

Wood had finished as Burnley’s leading scorer across all competitions in each of the past four campaigns, and the Clarets will be hoping that the 29-year-old comes through the tournament unscathed ahead of their season opener against Brighton August 14.

Wood has scored 24 goals in 59 caps for New Zealand at senior level and is included as an overage player, where he will be joined by West Ham defender Winston Read in the OlyWhites squad.

The forward netted from the penalty spot in a 2-0 win over Australia’s Olympic squad in a warm-up friendly and will hope to take that form into the games, where New Zealand face South Korea, Honduras and Romania.

Manchester United’s early season preparations could be disrupted after Eric Bailly was included in the Ivory Coast squad for the Olympic Games, joining Red Devils’ teammate Amad Diallo as part of the travelling party to Japan.

The Ivorians qualified after finishing as runners-up in the 2019 U-23 Africa Cup of Nations and will represent the continent alongside fellow qualifiers Egypt and South Africa.

It is only the second time the Ivory Coast have qualified for the tournament after losing to Nigeria in the quarter-finals of the 2008 Olympics and Bailly will represent a senior figure amongst their youthful side.

Both Bailly and Diallo have been called up with the blessing of Manchester United manager Ole Gunnar Solskjaer who admitted he ‘could not stand in the way’ of the duo from representing their nation at this summer’s games.

One of four Premier League players in the Brazil squad for the Olympics, Gabriel Martinelli will be hoping to seize his opportunity as the youngster bids to bounce back from a frustrating season at Arsenal.

The 20-year-old missed the first half of the 2020/21 campaign as he recovered from a long-term knee injury, though showed glimpses of his huge potential during the run-in, scoring twice in seven starts for Mikel Arteta’s side.

Brazil boast one of the strongest squads in the tournament and Martinelli will hope to feature regularly despite competition for places from Richarlison, Malcom, Antony and Matheus Cunha.

Having become the first Arsenal teenager since Nicolas Anelka to score 10 goals in his debut season, the Olympics could provide the forward with an opportunity to bounce back from a difficult second season and secure some much-needed minutes as he bids to make an impression in 2021/22.

Arsenal begin their Premier League campaign away at newly-promoted Brentford and may have to do without Martinelli and club teammate Gabriel if Brazil reach the latter stages.

Already capped at senior level, the Brighton midfielder will be amongst Argentina’s key players at the Tokyo games having scored four times in just five appearances for the Olympic side.

Initially unable to secure a work permit after signing for the Seagulls in 2019, the midfielder showed encouraging signs after being handed his opportunity last season as he continued his adaptation to the Premier League.

Argentina are ranked amongst the favourites to secure gold this summer, having previously seen a side containing the likes of Lionel Messi, Sergio Aguero and Angel Di Maria claim the prize in 2008.

The current contingent features a host of players still playing their club football in Argentina and offers an opportunity to make an impression with the world watching on, the South American side face Egypt, Spain and Australia in Group C this summer.