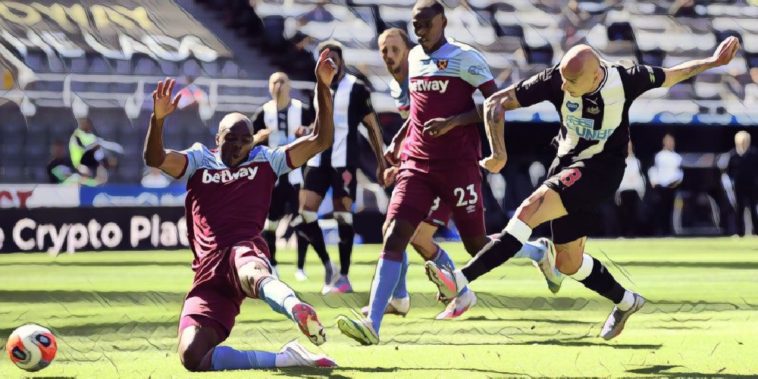 West Ham twice surrendered the lead to be held to a 2-2 draw by Newcastle at St. James’ Park.

The Hammers took the lead after just four minutes, Jamaal Lascelles failing to deal with a low cross from the right from January signing Jarrod Bowen, the ball landing at the feet of Michail Antonio who netted his second goal this week following his strike against Chelsea in midweek.

West Ham‘s lead lasted just 13 minutes though, Miguel Almiron continuing his decent run of form for Newcastle, the Paraguayan poking the ball in at the near post following an Emil Krafth cross.

David Moyes side came into the game just three points above the drop zone, but retook the lead 20 minutes into the second half, Tomas Soucek firing home from six yards out after Declan Rice had hit the bar from a corner.

However, the East Londoners would once again be pegged back, their lead this time lasting just two minutes. Jonjo Shelvey received the ball from Joelinton on the edge of box, played a one-two with Dwight Gayle around a static Hammers defence, before tucking the ball home past Lucasz Fabianski.

West Ham continued to create chances, but were unable to take the lead for a third time, and speaking afterwards, David Moyes admitted he was ‘disappointed’ at seeing his twice fail to hold onto their advantage.

“I think when we look back, we’ll probably think we’re disappointed after getting in front a couple of times, certainly the second time to concede a goal so quickly,” Moyes told the West Ham website. “By the end we probably were the team who had played the better – we got two or three chances near the end of the game.

“You’ve got to remember Newcastle are in-form, and they’ve showed really good form so far this season. I thought they played well in the first half and made it difficult for us in lots of ways, but all credit to the players. The players stuck at it. A point wasn’t the worst result, but I think we’ll all feel that there was a chance here to take three.

“The players are in good spirits. We played well in midweek and had a great win against Chelsea, and we came here today and did okay. I’m disappointed that we didn’t defend better at the times which really mattered.

“We’ve started to find the net a few times and probably could’ve done a few more times today, but ultimately, we’ve got to stop conceding if we’re going to win games.”

West Ham have five games to secure their Premier League status, including three against the teams in and around them at the bottom of the league, Norwich, Watford and Aston Villa.

Tweets of the Week: Liverpool bantered, Premier League stepdads and who is Luke Garbutt?