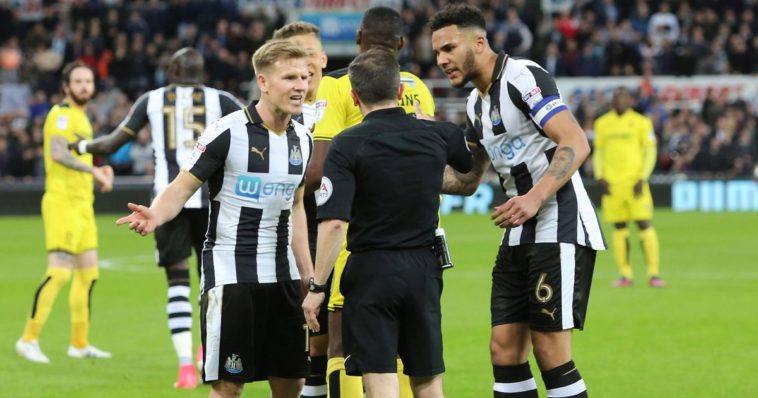 It was a hard fought 1-0 victory over Burton for the Magpies but the controversy was all surrounding referee, Keith Stroud.

Stroud disallowed Matt Ritchie’s penalty for encroachment by Dwight Gayle along with three Burton players who entered the box before the spot kick was taken. Rules say that the penalty should be re-taken but the referee awarded an in-direct free kick to Albion.

From the kick off it was clear to see which team was top of the table and which one was near the bottom. The hosts threatened countless times and passed the ball around effortlessly, giving Burton no chance.

Matt Ritchie kept finding pockets of space behind the back five of Burton, coming marginally closer every time. Paul Dummett’s low cross found Ritchie in the area but the Scotland international could not manoeuvre his feet in time.

Minutes later came a roar from the home supporters when Dwight Gayle was bundled over in the box. Matt Ritchie stepped up and converted the penalty, however the referee awarded an indirect free kick to Burton. Screams and boos echoed around St James’ Park and play was halted for several minutes whilst the referee discussed with his assistants but did not change his mind. Keith Stroud received horrendous boos when making the long walk down the tunnel at the break.

After the restart, the atmosphere was electric. There were chances galore for Newcastle. Ayoze Perez dragged his shot wide after latching onto a through ball and Matt Ritchie’s speculative effort was saved well by Jon McLaughlin.

Out of nowhere, Ritchie controlled the ball at the edge of the box and curled a volley into the far right top corner with his weak right foot. The winger netted his landmark fifteenth goal of the season in style.

From then on it was about pressuring the visitors until the end. It paid off when Sammy Ameobi squared the ball to Jonjo Shelvey giving a great chance to finish the game once and for all. The former Swansea man Shelvey fired over putting an end to this controversial contest.

At the end of the game referee Keith Stroud apologised for the penalty incident and saying it was the wrong decision. The win puts the Toon one point clear at the top with six games remaining.