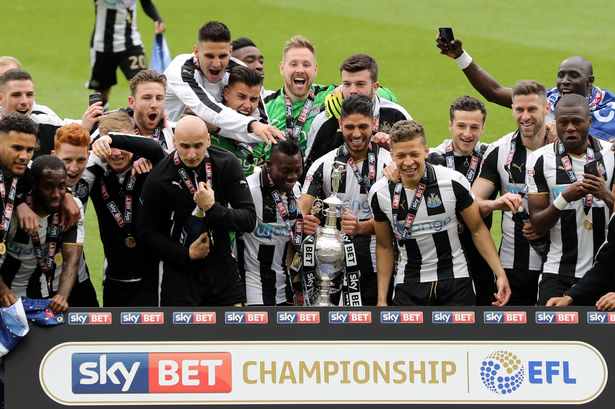 Newcastle United secured the Championship titles with a 3-0 win over Barnsley.

Title challengers and League leaders Brighton had lost their previous two games, meaning that the Championship title would go down to the last day between themselves and Newcastle.

The Magpies managed to steal the trophy from the Seagulls as they thrashed Barnsley 3-0 with Jack Grealish (Aston Villa) scoring a last minute equaliser to make the score 1-1 against Chris Hughton’s side.

After several bits of key play from the Newcastle players (Christian Atsu in particular) they soon deservedly broke the deadlock on ten minutes. Atsu drove down the wing and laid the ball off to DeAndre Yedlin, who sent in an inviting cross to Ayoze Perez, who in turn flicked the ball beyond the goalkeeper with great skill.

Atsu continued to unsettle the Barnsley back four and his long range strike almost flew straight in the top corner but Adam Davies was there to make a very good save.

Barnsley did threaten on occasions but the defence were alert 99% of the time and expertly cleared any danger.

Chancel Mbemba was one of those defenders and he even scored his first Newcastle goal in a Newcastle shirt during the second half.

The Congolese ventured forward into the oppositions box and fired in a rebound from Ayoze Perez’ shot. It was a massive sigh of relief for Mbemba, who had come so close to bagging himself a goal in the latest matches.

Minutes later the home fans were feeling aggrieved when Brighton were awarded a dubious penalty and Villa’s Nathan Baker was shown a red card. Glen Murray converted the penalty and Barnsley supporters were soon notified and started to become louder in the top corner of the stadium.

The Magpies did not let this faze them as they created chance after chance. Mitrovic towered over the two centre halves and directed his header on target but Davies made another save. Shelvey then came close but his shot rolled onto the post and out for a goal kick.

Dwight Gayle then wrapped the game up in added time when he finished a one on one to make it 3-0.

Seconds later screams of excitement and joy echoed the stadium when fans had discovered that Villa had equalised against Brighton and as it stood Newcastle were going to lift the title.

Following the final whistle, every single person in the stadium waited for confirmation of the Brighton score. Once it had there was even louder noise as Newcastle had snatched the trophy on the final day.