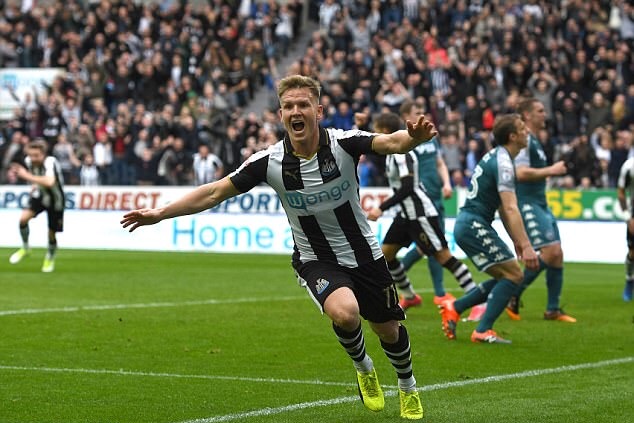 Newcastle took another step towards promotion by gaining another three points as they beat Wigan 2-1.

Michael Jacobs gave the away fans a glimmer of hope when he equalised before Matt Ritchie’s goal sealed the points for the Magpies.

In the first half, Newcastle saw their penalty appeals waved away. Matt Ritchie had an effort on goal which struck the defender. Referee, David Coote, waved play on though as he felt that the defender’s arm was not in an unnatural position. A correct decision from the official.

Wigan then almost took a surprise lead. Their corner was nodded down towards the far post, Omar Bogle was quick off the mark to time his run well, but Karl Darlow grasped the ball from the striker’s path to deny the opening goal.

Newcastle then threatened with a corner themselves. The ball met Dwight Gayle’s head at the far post before his re-bound was eventually cleared. There was another chance by a corner for Newcastle when Jamaal Lascelles ran free of his marker, but the ball went just wide.

The hosts’ persistency finally paid off. Vurnon Anita split the defence with a through ball to Mo Diame. The former Senegalese international then drilled in a cross to the back post where Dwight Gayle tapped the ball in. It was a deserved lead for the Magpies.

The lead didn’t last long though as Wigan benefitted from a bit of luck. Michael Jacobs latched onto a loose ball on the edge of the box. He put the ball through Lascelles’ legs before dinking the ball over Karl Darlow into the back of the Newcastle goal.

They then came close to taking the lead, however Dan Burn’s header narrowly missed the target.

The brief spell of possession and hope for Wigan was soon ended. Matt Ritchie shot cannoned off the post but he followed in and with a bullet of a header, scored on the rebound to make it 2-1. The winger then showed his passion for the club by kicking the corner flag over and celebrating with the fans.

If it was not for a good save by the goalkeeper, Matt Ritchie may have doubled his tally. Christian Atsu flicked the ball over the defence and squared the ball to Ritchie. The former Bournemouth man pulled the trigger and forced a good save out of Matt Gilks.

It was a vital three points for Newcastle. At the final whistle, the news came across that Burton Albion had scored a 96th minute winner against third placed Huddersfield. A result which strengthens Newcastles promotion claim.

However there is no time to celebrate. The Magpies have to go again on Wednesday night. They will be hoping that Burton Albion don’t dent their promotion push in the same way they did against The Terriers at the weekend.