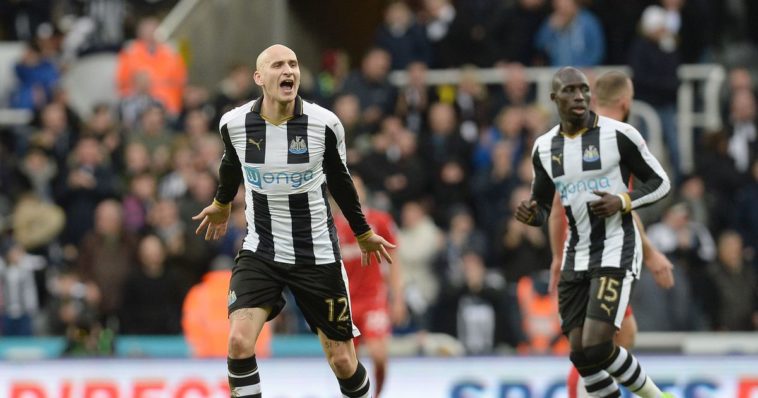 At the end of the first half there were definitely questions to be asked regarding the collective performance of Newcastle as they were 2-0 down against strugglers in the Championship, Bristol City but a team talk from manager Rafael Benitez clearly payed off as the Magpies came out after the interval with all guns blazing. Despite their best efforts, the home side could only come out with a 2-2 draw.

There were three changes made to the home team sheet; Mo Diame and Yoan Gouffran dropped to the bench for Ayoze Perez and Christian Atsu. Aleksandar Mitrovic also made the team replacing top scorer Dwight Gayle, who aggravated a hamstring injury last time out to Aston Villa.

Not a good start for the Geordies

Only ten minutes had passed in the match, Jack Colback failed to retain possession and the ball fell into the feet of Korey Smith on the edge of the box. The midfielder stabbed the ball into Gary O’Neil who whipped in a curling cross to the back post. Aaron Wilbraham was standing at the back post to head the ball beyond Karl Darlow. The Newcastle back line protested to the officials as they felt Wilbraham was in an offside positon. They had a right to question the decision as the thirty seven year old was marginally offside.

Once again the visitors were on the front foot with Aaron Wilbraham as the spearhead in attack; he flicked the ball over his head to Bobby Reid. Again it looked offside but Reid advanced towards the goal. To Newcastle’s fortune DeAndre Yedlin outpaced the twenty four year old and got his body across to clear the danger.

A few minutes later came the second for The Robins; it was a communication error between Paul Dummett and goalkeeper Karl Darlow. Dummett attempted to diving header the ball back to his goalkeeper. Unfortunately his header flew straight past Darlow and into the path of David Cotterill. The loanee placed the ball into an open net to make it 2-0 to the visitors on twenty minutes.

The only real chance for Benitez’ side in the first period was when Aleksandar Mitrovic’ out jumped a City defender and headed the ball towards the goal. The header was too tame to cause Fabian Giefer any problems and the goalkeeper caught the ball without any problems.

After the break Newcastle stepped up a gear. Within two minutes after the restart Aleksandar Mitrovic’ was about to release a venomous shot on goal but just as he aimed his shot the big Serb was blatantly pulled to the ground by Aden Flint. If a foul was awarded, Flint would have been shown red as he denied a clear goalscoring opportunity. The referee waved on play and Bristol City were able to clear the ball.

Moments later, Ayoze Perez controlled a low driven pass from skipper Jamaal Lascelles. The Spaniard struck a shot from outside the box and narrowly missed the target. The hosts were getting closer and closer to pull one back in the early stages of the second half.

On the hour mark, David Cotterill fired a long distance strike which spun and dipped whilst in the air. Darlow parried the ball back out to Bristol City but Ciaran Clark was there to sweep up the danger.

A minute later Newcastle were given their reward for the second half performance. Christian Atsu sent in a low cross before Korey Smith turned the ball into his own net. The game was back on for Newcastle United.

In the final twenty, Christian Atsu was at the back post to release a shot on goal. However the Ghanaian dragged his shot wide of the target.

An equaliser finally came for the Geordies; Ciaran Clark was on the end of a Matt Ritchie corner to hit the back of the net. Slow motion replays show that it hit the back of Clark. It was déjà vu for City as they gave away a lead like they did against Derby earlier in the month.

There was one last push for Newcastle before the final whistle, Jonjo Shelvey hit a venomous shot which beat the goalkeeper, but the ball went wide. It would have been a memorable goal if the ball crossed the line.

Newcastle have to prepare quickly as they face promotion rivals Brighton on Tuesday night hoping to recreate what they did against them at the beginning of the season. Bristol City came away with a valuable point which could aid them a lot in their fight for survival.