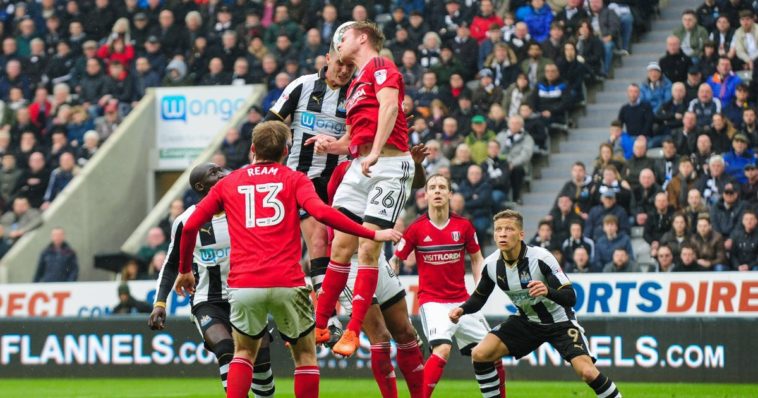 It was another slip up at home for Newcastle in their promotion challenge as they lost 3-1 to Fulham.

Tom Cairney put the visitors ahead with a perfectly struck shot from outside the box before sixteen year old Ryan Sessegnon netted two goals to put Fulham in the driving seat. Daryl Murphy managed to pull one back but it was not enough to spark a comeback.

Two changes were made to Fulham’s team which drew 1-1 with Leeds. Denis Odoi and Ryan Sessegnon came in for Ryan Fredericks and Chris Martin.

Newcastle began the liveliest in the first ten minutes. A series of long passes from Jonjo Shelvey were picking out Dwight Gayle and Christian Atsu across the pitch. It looked only a matter of time before Newcastle would get their first clear cut opportunity of the game.

However they were not able to capitalise as their transfer target, Tom Cairney, rifled a shot from outside the box which gave Karl Darlow no chance inside fifteen minutes.

Following the goal, The Cottagers dominated possession and looked very determined to double their lead. Sone Aluko breezed past the defence and had a good chance to make it 0-2 but Vurnon Anita was there to block the shot. Newcastle kept repeatedly lunging into challenges and therefore kept racking up the cards in the first half.

On the forty five minute mark, the hosts had chances that could have undeservedly levelled the score but on both occasions Christian Atsu and Mo Diame’s passes both could not find Dwight Gayle.

Newcastle were lucky to have kept the deficit to only one goal at the end of the first period.

Things went from bad to worse after the interval when Vurnon Anita forgot to track Ryan Sessegnon on the left and the sixteen year old put in a low cross for Aluko, Paul Dummett made an awful attempt to clear the ball and it fell into Sessegnon’s feet. The left back made no mistake in beating Darlow.

From then on the players in black and white looked nervous on the ball and were giving it away countless times. Soon after came the third goal. Vernon Anita did not track Sessegnon again on the left and had another easy finish putting it past the goalkeeper at his front post. Newcastle did not look like a team who were top of the table.

Daryl Murphy’s introduction from the bench was positive as he changed the game by winning aerial duals against the two centre halves. It was Murphy who pulled one back when he turned his marker and curled the ball into the bottom left. Unfortunately it was too late this time for a comeback as the service to the forwards was not precise enough for the remainder of the game.

In stoppage time Fulham were awarded a penalty when Dummett threw Ryan Sessegnon to the ground. Sessegnon wanted to take the penalty for a chance at his first professional hat-trick but was pushed away by Tim Ream. Ream stepped up and put the ball wide of the target leaving Sessegnon furious.

It was now goal difference separating Newcastle and Brighton at the top with Huddersfield behind by six points and a game in hand. It was how the Geordie nation hoped to celebrate a year of Rafael Benitez as Newcastle manger.