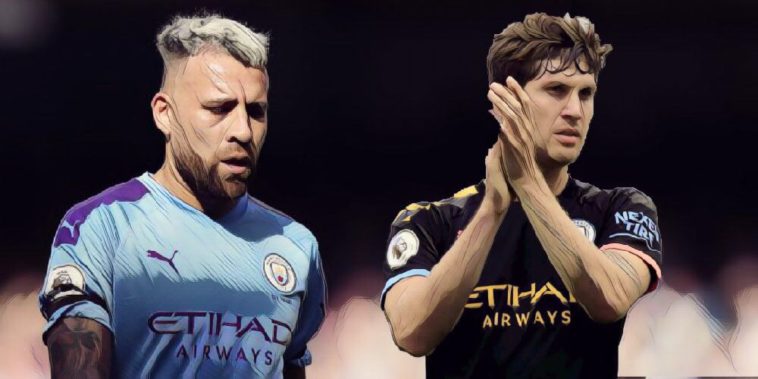 The champions suffered a shock 3-2 defeat at newly-promoted Norwich this weekend, with a series of defensive blunders allowing Daniel Farke’s side to capitalise, securing a memorable win at Carrow Road.

Man City‘s failure to secure a replacement for departed captain Vincent Kompany this summer and Aymeric Laporte’s subsequent long-term injury has left Pep Guardiola short of defensive options, with John Stones and Nicolas Otamendi combining at the weekend to produce one of the most comical moments of the season so far, with the Argentine being robbed by Emiliano Buendia for the Canaries’ third goal.

“Guardiola gave up on this partnership 18 months ago when Laporte came to the club,” Neville told Monday Night Football.

“Otamendi always gets caught out as a centre-back and quickens up the opposition in attack. He’s so not a Pep Guardiola type centre-back, they’re usually composed but he’s rash.

There are planetary orbits quicker than Nicolas Otamendi pic.twitter.com/XUp1KqZSmm

“Sir Alex Ferguson at times during his Manchester United career would see a game too far with players and say, ‘that’s it, you’re done’. Manchester City’s 4-3 defeat at Liverpool in 2018 was the game when Guardiola decided that Stones and Otamendi couldn’t play together.

“Laporte’s injury, Kompany leaving and not replacing him is a big problem for Manchester City. Stones and Otamendi have played 25 games under Guardiola in the Premier League.

“That will cost Manchester City the Premier League title. If these two play together at their current rate of performance they won’t win the league.”

Neville believes once solution for City could be a change of formation, switching to a back five to provide added solidity to the backline. The Sky Sports pundit believes City possess the personnel to switch to three centre-backs, with full-back Kyle Walker having utilised in the right centre-back role for England.

“He won’t do this because Pep Guardiola will never do what we expect, but he has played a back five before,” he added.

“I know the boy Joao Cancelo pretty well, I had him at Valencia. He can play right wing-back perfectly and Oleksandr Zinchenko is suited to wing-back. Walker has played in a back three for England and Otamendi has two people to cuddle him.

📰| Pep Guardiola is keen to give Joao Cancelo his full debut with Kyle Walker fighting to keep his place.

“That is a potential option, but at the moment I think he is thinking of a plan B.”

Meanwhile, Jamie Carragher was unsure on whether a change of formation would be wise, given City’s recent dominance of English football has come utilising their preferred 4-3-3 shape.

Carragher believes one alternative would be to use midfielder Fernandinho as a makeshift centre-back, though the Brazilian has little previous of experience in the position.

He said: “You don’t want to go away from that 4-3-3 because it is a machine. I don’t think they should rip that up. I think the solution for now is to go to Fernandinho [as a make-shift CB].”