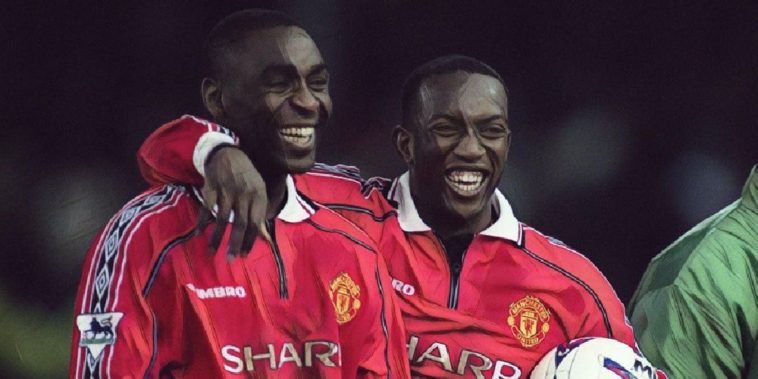 Gary Neville has discussed the ‘unique’ strike partnership between former Manchester United greats Dwight Yorke and Andy Cole, and called the pair as the best in the clubs recent history.

The two forwards formed one of the Premier League‘s most successful and iconic partnerships during a golden period of success at Old Trafford, winning three league titles and playing an influential role in the club’s famed treble-winning season of 1999.

Neville has now reflected on the seemingly telepathic understanding between his former teammates, and admits a ‘unique’ selflessness between the duo in who scored the goals played a huge part in the partnership’s success.

“When I first came into the Manchester United team, it was Eric Cantona and Mark Hughes, and during this period it was Yorke and Cole, with Teddy [Sheringham] and Ole [Gunnar Solskjaer] as well as strike partners,” Neville said on Sky Sports MNF Retro.

“Then it went on to Carlos Tevez and Wayne Rooney, who were absolutely sensational as well.

“I would probably say Yorke and Cole [were the best], just for that Treble season where they were absolutely sensational, the way they would play together. They lit up the whole league, they lit up Europe.

The combination between Cole and Yorke was out of this world. What a goal this is 🙌🇾🇪 #MUFC pic.twitter.com/k6w3TP5gxK

“I always remember a group stage game in the Champions League in Barcelona when the two played together. I’ve never seen anything like it. We conceded three goals, I was centre-back, but we scored three. Those two that night were absolutely brilliant.”

“When Yorkey signed, it was late on in the transfer window,” Neville added. “The season had already started, and it was a surprise in some ways. It came out of nowhere.

“Obviously, we knew Dwight Yorke from Aston Villa and he was a good player. You just didn’t think he was the one that was coming to United. What we didn’t realise was just how good he was.

“I don’t know what the plan was, because I don’t think him and Cole really hit it off to start with. It took maybe 10 or 15 games for them to get together, and then all of a sudden [it changed].”

“Leicester away sticks in my mind where they both played together and something happened that day.

“Then I think they started socialising together, getting on with each other. There was a respect between each other.

“The thing was about those two they didn’t mind which one of them scored.

“And I think that’s unique because when you’ve got a goalscorer like Cole, or players like Ruud van Nistelrooy or Michael Owen, it’s always sort of the goalscorer needs to score for them to be happy.

“But actually with Coley and Yorkey they got to the point whereby they didn’t care if either of them scored, they were both happy with each other.”

Keane insists his job was to make sure Manchester United won league titles, not to score goals