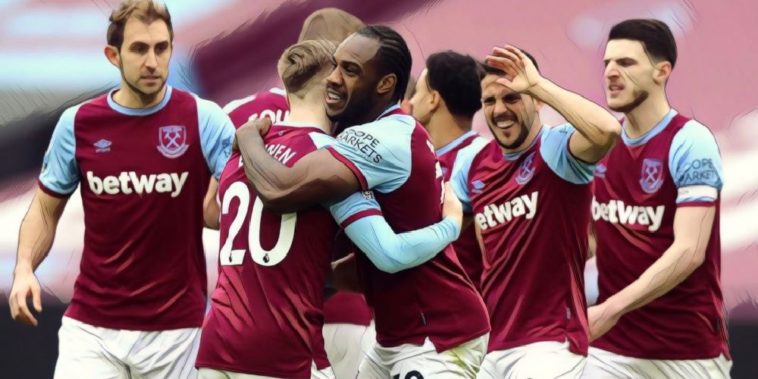 West Ham squandered a three-goal lead as they were pegged back to draw 3-3 with Arsenal in a hugely entertaining game at the London Stadium.

West Ham started by far the brightest, and after just 15 minutes, they would take the lead, Michail Antonio driving down the left channel before cutting the ball back to Jesse Lingard on the edge of the box. The on-loan Manchester United man took a touch to set himself, before smartly firing past Leno.

Two minutes later and a quick bit of thinking from Lingard triggered the Hammers second, the 28-year-old playing a quick free-kick down the side of the Arsenal defence into Jarrod Bowen, the former Hull City winger drilling the ball under Leno with visitors not able to get themselves set.

West Ham looked to be on their way to a superb win as they further extended their lead just after the half-hour mark, Michail Antonio getting on the end of Vladimir Coufal’s inviting cross, with replays showing his header took a touch of Tomas Soucek before finding its way into the back of the net.

The Gunners gave themselves hope of a comeback before the interval in what was a breathtaking first half, a Callum Chambers cross being controlled by Alexandre Lacazette before the Frenchman’s effort clipped off the foot of Soucek to leave Fabianski helpless to keep it out.

Chambers was involved again as the north Londoners pulled another back just after the half-hour mark, his drilled cross following a quickly taken free-kick seeing Craig Dawson putting the ball into his own net for a second successive game.

West Ham had a couple of excellent opportunities to restore their two goal advantage, Chambers putting in a vital block to deny Lingard, while Antonio saw an effort crash back off the post following a cross from Benrahma.

2019 – Craig Dawson is the first player to score an own goal in consecutive Premier League appearances since Conor Coady in January 2019, and the first to do so for West Ham. Woopsy. pic.twitter.com/kOkBErmpBn

The Hammers would come to regret those missed opportunities as Arsenal completed their comeback with eight minutes remaining. Mikel Arteta’s side once again found joy down the right side as Nicholas Pepe put a ball in with his weaker right foot for Lacazette to nod home at the back post.

The result leaves West Ham fifth in the league, two points adrift of Chelsea and seven ahead of today’s opponents, and speaking afterwards David Moyes took the positives out of his side’s display, admitting his side were ‘devastated’ at the result.

“It was a really good game, tough, lots of goals,” he told Sky Sports. “We played very well especially in the opening 30 minutes and unfortunately we gave them a goal before half time, which gave Arsenal a foot up.

“There was a lot of frustration throughout the game about the decisions, but that’s the way football goes sometimes.

“We played very well for long periods, Arsenal played well but are in good form, it wasn’t a great result after going 3-0 up but we showed we are up there competing with the best teams.

“It has been a long time since we finished above Arsenal, we have done our best to make sure they can’t catch us. Now we want more, I’m greedy and they are devastated in the dressing room at not taking three points.”

Next up for West Ham after the international break is a trip to face Wolves.