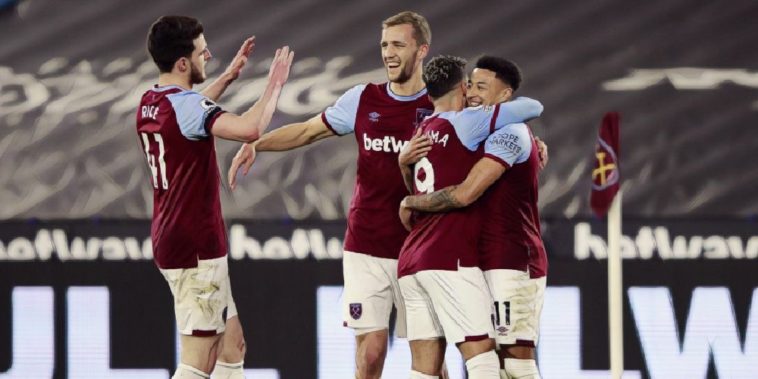 West Ham’s impressive season continued as they beat Leeds 2-0 at the London Stadium on Monday evening.

Leeds twice had the ball in the back of the net inside the opening eight minutes, only to see them both chalked off. Firstly, Tyler Roberts saw his effort disallowed after Helder Costa was judged to be offside in the buildup, while Patrick Bamford saw an effort ruled out after the ball had just crossed the byline before Raphinha’s cut back.

Despite Leeds’ early attacking threat, it would be West Ham who took the lead in the 21st minute, after Luke Ayling had brought down Jesse Lingard in the box. Lingard stepped up to take the resulting penalty, and while Illan Meslier kept out his tame effort, he parried it straight back into the path of the on-loan Manchester United man who made no mistake with the rebound.

The Hammers would double their lead seven minutes later, Leeds failing to pick up the run of Craig Dawson from an Aaron Cresswell corner, the 30-year-old nodding home from close-range.

Dawson also came inches from netting his second in first-half stoppage time, the centre-back once again evading Leeds’ zonal marking at a corner, only to see his header come back off the post.

Marcelo Bielsa made two changes at the interval, and the Argentine saw his side become much more of a threat after the break, 15 of the 17 attempts coming in the second half, including West Ham goalscorer Dawson clearing an effort off the line, though the West Yorkshire side were ultimately let down by their finishing.

“Everybody says Leeds are a good watch,” Moyes told BBC Sport. “It’s a difficult game against them. We were fortunate at times but a little unfortunate at others.

“We were resilient, we didn’t play well tonight. I don’t think Leeds help you play well, you have got to earn it.

“You never know with VAR when the first goal was disallowed, you never know if it will be given. We grew into it and regained a little bit of control by the break.

“People who want to head the ball is a dying art. Craig Dawson is very good at it.

“Leeds make you play at an incredible intensity. All clubs when they play Leeds, their running stats will be as high as any time in the season.

“When you get near the top it gives you a big incentive. I was gutted when we dropped out the top four.”

The result moves West Ham up to fifth, two points behind Chelsea who beat Everton 2-0 earlier on Monday evening.