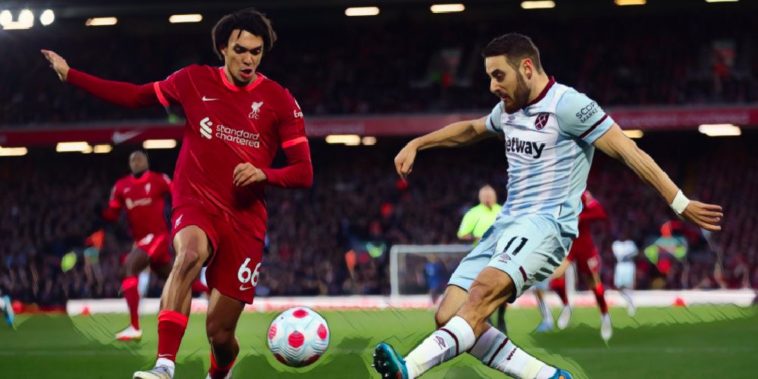 West Ham were left to rue a host of missed chances as their top four hopes were dealt yet another blow after they slipped to a battling 1-0 loss to Liverpool at Anfield.

Liverpool had the better of the opening exchanges and took the lead just before the half hour mark. A scuffed shot by Trent Alexander-Arnold from the edge of the area ultimately found the instinctive run of Sadio Mane, who got in behind Craig Dawson before touching the ball past Lukasz Fabianski from close range.

West Ham kept it tight at the back and offered plenty of threat going forward, with both sides seeing an effort cleared off the line before the break.

The pre-match headlines were dominated by the news of Declan Rice’s absence from the Hammers lineup, the influential midfielder ruled out through illness, and their hopes were dealt a further blow as Jarrod Bowen was forced off early in the second half.

Despite that though, West Ham created the better opportunities in the second half, with Liverpool not quite showing the same intensity after the break, and Manuel Lanzini spurned a wonderful opportunity to equalise midway through the second period. The Argentine got in behind the Reds defence to meet a cross from the right, but having taken a composed touch to control the ball, his finish was all but composed as he sent his effort over the bar.

Michail Antonio also saw an effort blocked by Naby Keita as the East London outfit looked to draw level, the Hammers looking a constant threat on the break. Ultimately though, they were left ruing the quality of their end product as Liverpool claimed all three points.

Despite the defeat, Hammers boss David Moyes was pleased with his side’s performance

“A much better performance and good performances tend to lead to good results,” he told Sky Sports. “We didn’t quite get the result today but we got a much-improved performance.

“We’ve come close here recently. They have got so many areas of the pitch where they can score goals from it is difficult to fill them all up.

1-0 wins are the building material for title challenges but in truth both teams wasted good chances in this one. David Moyes has now managed away at Big Four clubs 66 times in the PL and never won.#LIVWHU pic.twitter.com/stLDYM100V

“We’re trying to be attack-minded. I don’t want to go away and just sit in but there were times today where we had to suffer without the ball.

“They started very well but we grew into it. We had a great chance when Pablo [Fornals] was through but he didn’t finish. And late on if any team was going to get a goal it was us.

“We need to be clinical, the quality of the last finish and cross which has been lacking.

“I thought Michail Antonio was exceptional today but we are still needing the little bit of class at the end that we have lacked in recent weeks.”

Asked for an update on Bowen’s injury, the Scot admitted he was worried given the way the forward left the field.

“They seem to think that the tackle from Robertson, around his heel area,” he said. “Not sure where but we will get him scanned. Jarrod has been exceptional for us so the last thing we want is for him to be injured.

“It could be nothing, but in the same breath I didn’t like the way he wasn’t able to put his weight through his foot so that worries me.”

West Ham remain in fifth, but have now played four more games than sixth-placed Arsenal and three more than seventh-placed Spurs in the race for Champions League football.