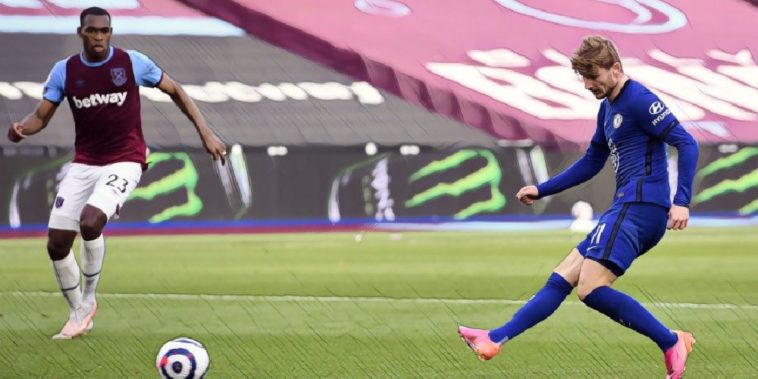 West Ham’s hopes of Champions League football were dealt a blow as they slipped to a 1-0 loss to fellow top-four rivals, Chelsea.

Unsurprisingly, Chelsea enjoyed large swathes of possession from the off, as the well-drilled Hammers looked content to sit back and wait for their moments.

After keeping it tight for the opening 30 minutes or so, West Ham grew in confidence and had a solid spell of possession towards the end of the first half, though would end up falling behind two minutes from the break following a Chelsea breakaway.

Timo Werner dropped in between the midfield and defence to receive the ball, holding off the challenge of Issa Diop before laying it off to Christian Pulisic. The American fed Ben Chilwell down the left, before the 24-year-old wing-back picked out Werner in the box, the Blues number 11 firing his side ahead with a first time finish, his first goal since mid-February.

West Ham started the second half brightly but were unable find a leveller, while Lukasz Fabianski would make a couple of smart saves at the other end to keep the score at 1-0. Goalscorer Werner also missed a glorious opportunity to double his tally, sending an effort wide after pouncing on a parry from the West Ham ‘keeper following a Mason Mount effort.

Any hopes that West Ham had of salvaging a result would be ended as they finished the game with 10 men, Fabian Balbuena seeing red after his clearance caught Ben Chilwell, a decision that seemed harsh on the Paraguayan who could do little about his follow-through in what was another low moment for VAR.

The result moved Chelsea three points clear of West Ham in the race for Champions League football, and speaking after the game, David Moyes lamented the current injuries to his side, the Scot missing the likes of Michail Antonio and Declan Rice.

“We had a big game against them last year when we were in a relegation battle and we won that one,” he told Match of the Day. “This year it was a battle for the Champions League and we couldn’t win it.

None of Chelsea's starting defenders were dribbled past vs. West Ham today.

They kept Jesse Lingard & co at bay all evening. pic.twitter.com/XrwwXtp1yd

“We showed character in the second half to make a better game of it. If we can get all our players back and play Chelsea again tomorrow, it would give us a better hand. We were always in the game, we’re just disappointed we have nothing to show for it.

“We wanted to be in the mix right to the end. If we can give ourselves a chance with the games we’ve got and be in the mix for European football, it’d be great. We’ve been fourth a couple of times this season. It feels good.

“It’s great that we have a chance to get back into the top four. We’re playing against Chelsea and trying to compete, but we just weren’t quite good enough today to do that.”

Asked about Balbuena’s red card, Moyes was understandably aggrieved by the decision and a seeming lack of consistency: “I can only say it’s someone who’s never played the game who’s made the decision. Where’s he meant to put his foot? There was a similar incident with Coufal on Rudiger. That would have at least merited a yellow if the first one was a red. I think we’ve had a day where the refereeing has been really poor.

“Was it a clear and obvious error that the referee missed? It was a really poor decision because we were in the ascendancy at that time.”

Next up for West Ham is an away trip to face Burnley.