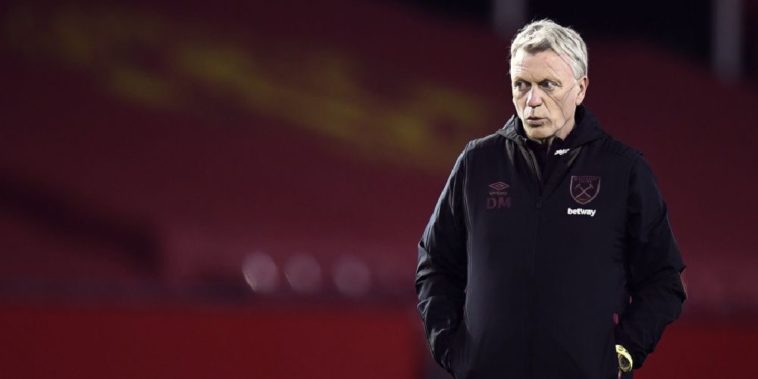 David Moyes has discussed West Ham’s hopes of a top-four finish and has reflected on his time at Manchester United ahead of his latest return to Old Trafford.

West Ham travel to face Manchester United in the Premier League this weekend, the two sides currently fourth and seventh in the division and competing for a top-four finish and Champions League qualification.

Moyes admits it is a difficult challenge to gatecrash the Premier League’s top end, but is hopeful his side can remain in the race as they bid for a place among Europe’s elite next season.

“We don’t necessarily see ourselves as quite there yet [being a top-four club], but we want to try and challenge them and have a good go at hanging in there,” said Moyes at his pre-match press conference.

“Let’s be fair, the level of competition for those spots is very strong. Over recent years, it’s been quite a regular group of teams who have been there, with maybe the likes of Leicester City and Tottenham Hotspur too.

“It’s not an easy group to break into. We’re going to keep trying to hang in there, and see where we end up.”

Tomorrow’s clash will be Moyes’ latest return to the Red Devils, having endured an ill-fated 10-month reign at Manchester United during the 2013/14 season.

The Scot struggled after being named as Sir Alex Ferguson’s successor and admits his time with the club was a disappointment given his managerial successes elsewhere.

“Manchester United is a brilliant club and it was a great job for me to have,” he said.

“I’m more disappointed in myself that I couldn’t do a better job in my period there, but overall, as everybody’s seen, Manchester United have had some of the best managers in the world, even in recent years, and it’s a tough job.

“It happens in football – you don’t always get it right or win all the games you should do at times – but I look back at it with really fond memories.

“I took over from Sir Alex Ferguson, which was a really difficult task, but I was really fortunate to be offered the job.

“Not many people get offered the Manchester United job, and to get offered it in the first place tells you exactly how you’re thought of.”