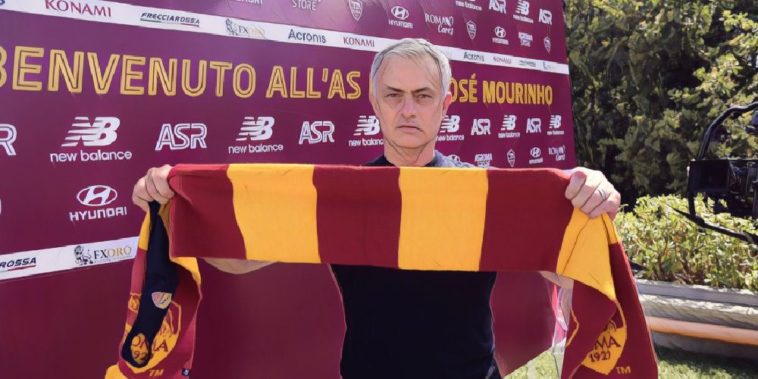 Jose Mourinho has been presented to the Italian media after taking over as Roma boss this week.

The three-time Premier League winning manager has returned to Italy following a previously successful stint in charge of Inter Milan, winning back-to-back Serie A titles with the second coming as part of an iconic treble-winning campaign.

In the 11 years since he left his role at the San Siro, Mourinho has had spells at four different clubs, winning the league title with Real Madrid and again during his second stint at Chelsea, before going on to spend less successful spells with Manchester United and Tottenham.

The Portuguese was removed from his position at Spurs back in April just days before the club’s appearance in the Carabao Cup final, before securing a swift return to management by agreeing to take over at Roma this summer.

The Roman club are without a major trophy since they won the Coppa Italia back in 2007/08, while they were only able to finish a distant seventh in Serie A in the most recent campaign, and speaking at his official unveiling in the Italian capital, Mourinho was asked about the ‘challenge’ of managing the Giallorossi.

“The next challenge is always the most important one, so yes,” he said.

“When we talk about Italian football we talk about the EURO finalists, and most of the Azzurri players play in Serie A. If the Italian league is not seen as a top league, it’s our responsibility and we have to do something more.

“I work for Roma, but, indirectly I work for Italian football too.”

Mourinho recently claimed he was a much better manager than during his stint at Inter given his added experience, and he now says he is ‘more emotionally solid’, before going on to mention his so-called ‘disaster’ spells in Manchester and North London.

“I am the Roma coach, I don’t want to be anything else,” he said. “There’s a lot to do here, I’ve been covering this role for 24 hours, except a few hours I need to sleep.

“If, during this time, we can give something to Italian football, so that’s great, many things can happen and I will give everything to defend my players, but I won’t be the one looking for troubles, I don’t have time for that. I have more experience now, so I am more solid emotionally, but I will always defend my club.”

The 58-year-old however refuted suggestions that he is no longer the manager he once was, singing his own praises to point to his successes over the years.

“I have nothing to say. In my last three clubs I won the title at Chelsea, three cups at United, a final at Tottenham. We were 12th [when we took over] we finished sixth, reaching the Europa League. What’s considered a disaster for me it’s something that others have never achieved, it’s my fault.”

The Portuguese insisted he was determined to bring long-term improvements and sustainability to his new club rather than ‘isolated success’.

“Roma don’t belong to me, but to Romanists, I am just one more,” he added. “I don’t like to hear Mourinho’s Roma, but if you want, you can talk about Sarri’s Lazio, or Allegri’s Juventus

“You always talk about titles, we talk about the project and work. It would be easy to promise that, but the reality is something else.

“We talk about the project and improving. You talk about titles, we talk about projects. The owners don’t want an isolated success, they want to get there and stay there, which is more difficult. It’s easy when you win and have no money to pay salaries, but we want to be sustainable and we have the same view. We’ll work and we’ll reach a title.”

Picking the best XI from the Euro 2020 semi-finals