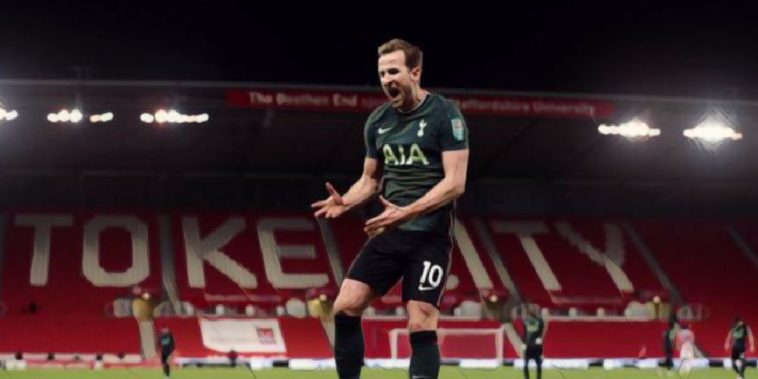 Jose Mourinho took one step closer to a fifth League Cup triumph as Spurs earned themselves a 3-1 win over Championship side, Stoke City.

Spurs dominated the earlier passages of play, and got their breakthrough midway through the first half in fine fashion. Harry Winks – a player who has struggled for game time of late – lofted in a delicious cross from the left with Gareth Bale expertly steering his header beyond Andy Lonergan from all of 15 yards.

The visitors spurned a number of first-half opportunities to extend their lead, and eight minutes after the break they were made to pay for those missed chances.

Stoke had come out of the traps with much more purpose in the second half, and they got their reward when Jordan Thompson met Jacob Brown’s cross at the back post to beat Hugo Lloris.

The Premier League side regained their lead halfway through the second half though, left-back Ben Davies seeing his sweetly-struck strike from distance skidding across the surface to beat Lonergan into the bottom corner.

With nine minutes left to play, Harry Kane booked Spurs’ place in the last four. Stoke made a mess of their attempt to play out of the back, with the England skipper lashing his effort into the roof of the net in ruthless fashion.

Speaking afterwards, Jose Mourinho lamented his side for letting Stoke back into the game, but insisted the result was ‘totally deserved’

“For a certain period it was 1-1 and at 1-1 the game is open,” he said at his post-match press conference. “I believe in the first half we were very solid, very dominant, not enough intense aggression to score more goals but enough to dominate the game, Hugo didn’t touch the ball, they didn’t have a shot, have a corner and the first half was totally us but the result was short.

“I know on the bench they had Vokes and they had Fletcher on the pitch, I knew that if the result goes in that direction they would have a go and we needed to kill the game. Instead of killing the game, we killed ourselves by losing a counter-attack ball and allowed them to score the 1-1.

“After that it was a moment where we needed stability and attitude and we had it and the second goal came and the third too. I heard Son scored a goal that with VAR would be legal, but we deserved it, we totally deserved it.”

Spurs last trophy came back with their League Cup win in 2008, though the Portuguese was keen to remain grounded about getting their hands on some silverware.

“To win this trophy we need to win two matches. But they are two very difficult matches. To win other trophies you need to win much more matches. The FA Cup didn’t start for us. The Europa League we are in the last 32. We are really far from getting there. In the Premier League I told you already what we are.

Spurs will now face Brentford in the semi-finals of the League Cup in January.