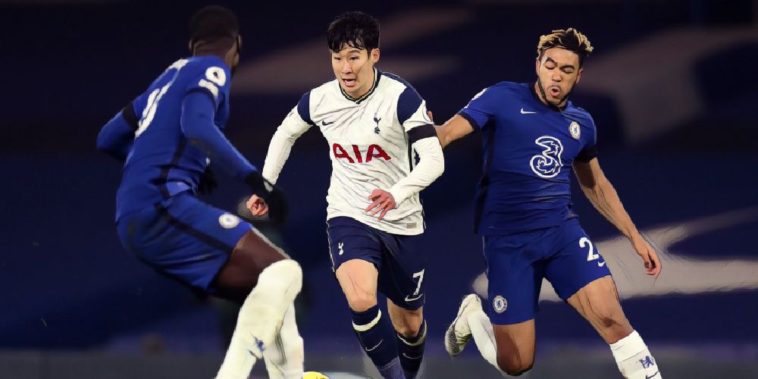 Tottenham moved back to the top of the Premier League as Jose Mourinho’s side ground out a 0-0 draw on his latest return to Stamford Bridge.

Before the game, many would have predicted for Chelsea dominate the ball and for Spurs to be happy to sit back and wait for the space on the counter, and that’s exactly how the game panned out with each knowing that a win would take them top of the table.

Chelsea thought they had taken the lead in just the 11th minute, Mason Mount playing in Timo Werner in the left channel, with the German expertly curling his effort beyond Hugo Lloris, only to see the flag raised for a marginal offside.

The Blues were the most adventurous and created the vast majority of chances, continually probing down the right with crosses from Hakim Ziyech and Reece James, although Hugo Lloris was only really tested by a long-range Mason Mount effort, with Tammy Abraham particularly wasteful in front of goal.

Overall, it wasn’t a game that will live long in the memory, and even when both sides made defensive errors in the dying embers, neither team were able to take advantage, Olivier Giroud and Giovani Lo Celso spurning the opportunity to steal the points in stoppage time.

13 – Spurs have won 13 points away from home in the Premier League this season (W4 D1) – converting to three-points-per-win all-time, only in 1960-61 have they earned more points from their first five games on the road in the top-flight (15). Foundations. pic.twitter.com/nY2RmTkhzf

Speaking afterwards, Mourinho said his players were unhappy with not securing a win, a ‘mentality’ which pleased the Portuguese as he looks to steer the club to a first league title since 1961.

“The one thing that I take from the game is that a draw here normally is a positive result,” he told Sky Sports. “To stay top of the league with that result is also a positive thing. My dressing room is not happy. That is the best thing I take. We are not happy. It is fantastic.

“It is a complete change of mentality and personality. We didn’t have many chances but how many did they have? That is the thing that makes me really happy – we are not happy with a draw at Stamford Bridge

“The game did not have many chances. It is a game where we both wanted to win. We respect each other.

“Nobody gambled. Nobody tried to change the direction of the game. Everybody was thinking ‘one mistake, we get punished’. They had one shot from distance, we had more in the first half than the second. I think a big game is difficult for both teams.”

Next up for Tottenham is an away trip to face LASK in the Europa League, before hosting north London rivals Arsenal next weekend in front of 2,000 fans at the Tottenham Hotspur stadium.

“We stay top. I like the feeling and I think it is only for 2,000 fans but the feeling of playing the first game with public and being top is a gift for the fans,” Mourinho added.

“Not just these 2,000 but what they represent – the universe of Tottenham fans. We are happy. But I don’t change my mind. If we are a bit better we win today. It was there to win. To be top is just a nice thing. The next match we need to win.”