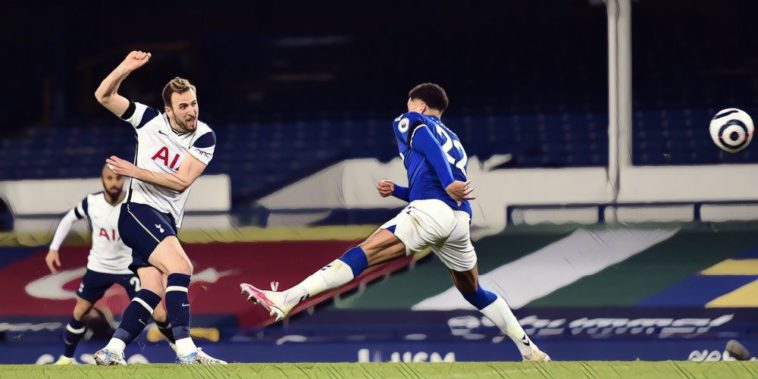 Spurs were held to a 2-2 draw with Everton at Goodison Park, a game in which Harry Kane netted a fine brace before being withdrawn with a worrying injury.

It has been a high scoring fixture in recent seasons, with 37 goals being scored in the nine previous meetings between the sides, including the 5-4 win for Everton in the FA Cup back in February.

After a dull and non-descript opening, Spurs would open the scoring in the 27th minute through Harry Kane. Michael Keane misjudged the flight of a Tanguy Ndombele cross while Mason Holgate also got attracted to the ball, Kane finding himself unmarked in the area, taking a lovely touch, before firing home with his left on the half-volley from eight yards out for his 20th league goal of the campaign.

Within two minutes though, Everton would be handed the chance to level the scores, Sergio Reguilon clumsily bringing down James Rodriguez just inside the area, with Gylfi Sigurdsson stepping up to despatch the resulting spot-kick against his former side.

Carlo Ancelotti had sent his side out with three-at-the-back, with Alex Iwobi somewhat surprisingly being selected at right wing-back ahead of Seamus Coleman. However, the Irishman would make an almost instant impact after being brought off the bench on the hour mark, playing a neat one-two with Richarlison before whipping a delicious cross towards the penalty spot which was met by Sigurdsson, who netted his second of the game with a fine first-time finish.

Once again, the lead wouldn’t last long though, and again Everton were the masters of their own undoing. Holgate and Keane once again getting themselves in a right old mess at the back from an Eric Lamela cross, the ball again landing at the feet of Kane who emphatically lashed it past England teammate, Jordan Pickford.

Both sides would have chances to steal a winner, Kane seeing a header drift agonisingly wide while Richarlison blazed over as the two sides had to settle for a point that, in truth, will do neither side much good in their pursuit of European football.

Speaking after the game, Jose Mourinho said the draw was ‘a fair result’, praising Everton’s pressing game, particularly through Richarlison.

“I think it was a game between two teams that have lots of similarities,” he told Sky Sports. “We are very similar in many aspects. It’s teams who are capable of scoring goals and can concede too. It was a good game where both teams tried to win it and probably a fair result.

“It was not an easy game to have the ball due to pressing. Richarlison presses a lot the first line. They had Alex Iwobi and Gylfi Sigurdsson. I don’t think it was easy from behind.”

The Portuguese was inevitably asked about the decision to award Everton a first-half penalty, replays suggesting there was minimal contact between the two players.

“I am not going to comment. In so many experiences and years in this moment I just laugh. That’s the way my team normally is, we don’t have many complaints. I’m okay [that the Spurs players] didn’t complain. The job is done and the referee made the decision.

“It’s very difficult for VAR to make a decision to go against the referee decision. Against the same referee against Arsenal we complain about the penalty and it is still there. The players probably felt the same as I felt.”

Having netted twice, Harry Kane was forced off the field in added time with what looked like another ankle injury, a worry for Mourinho ahead of next weeks Carabao Cup final.

“It is too early to say something,” said the Portuguese. “For him to leave the pitch with a few minutes to go is obviously because he felt something. Let me be optimistic and believe that he has time to recover. Let’s see.

20 – No Premier League side has dropped more points from winning positions this season than Tottenham Hotspur (20, level with Brighton). Issues. pic.twitter.com/PW5vkMx8Hy

“Let me be optimistic and believe it’s nothing serious. It’s obvious he’s a very important player for us. I cannot say much or speculate.

“Both [Kane’s goals] were from crosses but it was great finishing. It’s the kind of player that when you see the first touch and the control, we are used to seeing it in training and we know it is fantastic finishing. Two beautiful goals but not a surprise for the ones who see him do it every day in training.”

Before that aforementioned final against Man City, Spurs have a Premier League meeting with Southampton next Wednesday evening.

Read also – Where next for the soul-sapping sociopath Mourinho when Spurs finally see sense?