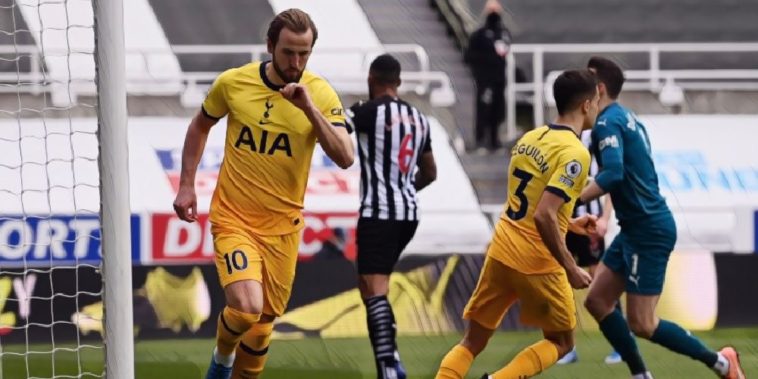 Spurs missed the opportunity to move into the top four as they once again dropped points from a winning position after being held to a 2-2 draw by a struggling Newcastle side.

The Magpies have been wildly underwhelming in recent weeks, but they started by far the brighter side, with Hugo Lloris being forced into a smart double save to twice deny Dwight Gayle from close range after 19 minutes.

While Newcastle looked bright, Spurs looked sloppy at the back, and in the 28th minute, their slopiness contributed to them going behind. Twice in quick succession, they surrendered possession before Sean Longstaff played a perfectly weighted ball across the box to Joelinton who showed excellent composure to calmly stroke home into the bottom corner.

Spurs would respond immediately though, Tanguy Ndombele sliding the ball into Giovani Lo Celso who in turn found Harry Kane in the box. Newcastle appeared to have switched off as they failed to clear their lines, with Kane benefitting from a fortunate deflection before poking home from close range to level the scores within 90 seconds of going behind.

Less than five minutes later Spurs turned it round, this time Ndombele sliding the ball straight into Kane, the England skipper timing his run to perfection, taking a touch before drilling across Dubravka’s goal and into the bottom corner.

Spurs were all over the place at the back at times though, and will have been relieved by the host’s wastefulness in front of goal, Joelinton sending an effort wide at the back post midway through the second half.

Newcastle did show plenty of attacking intent and endeavour throughout the game, and finally got their reward in the 85th minute, Miguel Almiron seeing an effort blocked before on loan Arsenal man Joe Willock smashed home the rebound to earn his side a point.

Most points dropped from winning positions in the Premier League this season:

Spurs climb up to third in this table. 🙃 pic.twitter.com/lnVauyJQU0

Spurs did have chances to win the game themselves, Harry Kane hitting the post seconds before Willock’s leveller, but speaking afterwards, Jose Mourinho lamented his side’s ‘defensive mistakes’ as the reason behind the dropped points, saying it caused ‘instability’ in their display.

“The Premier League is hard and is high-level football, and when in some actions you don’t show that you belong to that high level of football, it’s difficult,” the three time Premier League winner told the BBC.

“We made mistakes. We made defensive mistakes that lead to instability. In the first half we were always in control, even in the second half when we had the ball we didn’t have any problems.

“We could have scored a couple more, but in defensive situations we create instability with our mistakes – and instability brings hope to our opponent, and our opponent didn’t give up. I had the same feeling and I’m on the bench. It’s difficult to have the feeling of absolute control because I know that what happened can happen.

“It’s not just about the defensive mistakes that lead to goals, we have situations where we have the ball and I know already the ball is going to end with Hugo Lloris. That’s the way we sometimes create instability to ourselves. We gave the chance to the opportunity to push up.”

Spurs now have a week to regroup ahead of their weekend fixture against second-placed Manchester United, the north Lononders having put six past Mourinho’s former side earlier this season.

See also – Journeymen: The six players to have played for seven or more Premier League clubs