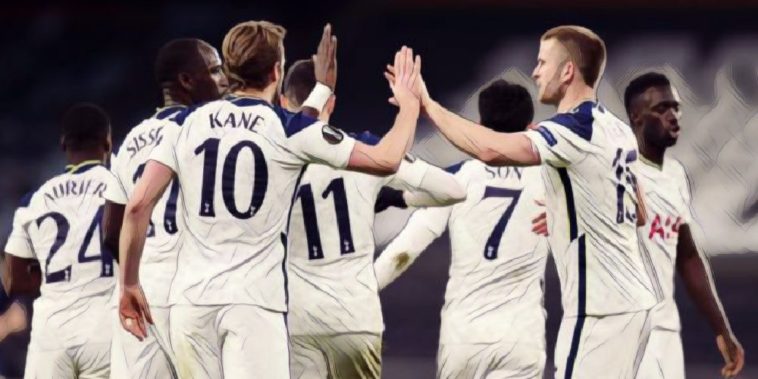 Spurs took a big step to securing their place in the Europa League quarter-finals with a 2-0 win over Dinamo Zagreb.

Jose Mourinho’s side had to be patient for their chances, with the Croatian side looking to keep it compact, putting plenty of men behind the ball in a bid to keep themselves in the contest for as long as possible.

Their resistance lasted just 25 minutes though, a jinking run from Erik Lamela who worked a shooting opportunity for himself, though the Argentine was unlucky to see his effort come back off the post. The ball fortuitously fell at the feet of Harry Kane, though, the England striker slotting into an empty net for his 25th of the season.

Spurs continued to dominate and saw a shout for a penalty turned down, Tanguy Ndombele caught by a challenge from Lovro Majer, though the Dutch referee opted against pointing to the spot.

The North London side would eventually extend their lead, and once again it was a gift that Harry Kane duly gobbled up.

Harry Kane has now scored eight goals for Tottenham in this season's #UEL, no player has netted more for the club in a single European campaign.

Another record for the Spurs striker. 🥇 pic.twitter.com/6NGLApcwBN

While Kane was in the right place at the right time for his first, his second came as former Cardiff defender Kevin Theophile-Catherine made a complete mess of his attempted clearance of Serge Aurier’s cross. Again, the ball again landed at the feet of the Spurs striker, who quickly shifted it onto his right, before firing low across goalkeeper Dominik Livakovic.

Speaking after the game, Mourinho was satisfied with taking a 2-0 over to Croatia for next weeks second-leg.

“I believe one more goal would be a good reflection of the game and would put us in a much better position. But before the game if you asked if 2-0 was a good result I would say,” he told BT Sport. “It is only a good result if we do the job there. It will be a difficult match. At home they will feel more comfortable to have a go with nothing to lose.”

Having bagged a brace, Harry Kane ended the game holding a bag of ice to his knee after being hacked down, and with a North London derby on the horizon at the weekend, Mourinho allayed any serious injury fears.

“Harry I don’t believe it is anything big. Sunday is a match everyone wants to play and little things will not stop him. I don’t have the feeling it is anything serious.

“He is doing everything. He is doing the striker job of scoring goals. The teamwork of creating space and linking play and the extra work not many strikers do in defence. He helps us a lot. He has an incredible number of clearances from crosses and corners. We couldn’t be happier.

“I gave a rest to many of the players and am so happy with what Vinicius is giving us. But with Harry on the pitch it is a different story for us.”