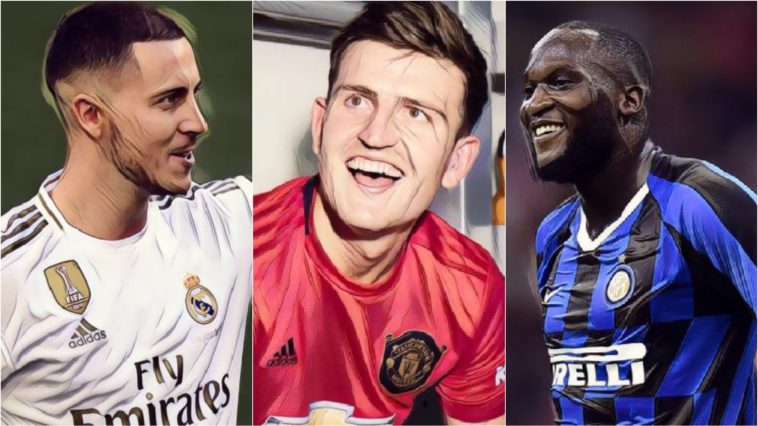 The ten most expensive transfers of the 2019 summer window, from Eden Hazard’s dream move to Romelu Lukaku finally getting to Italy.

If the hyperinflation of football is meant to be slowing down, then this summer showed no signs of a decline as £5.25bn was spent in the transfer window just gone.

Think about that: five billion on footballers alone. Imagine the things you could do with that money, and a bunch of rich, Tory-voting football club owners went and spent it on a bunch of dudes to kick a round object around.

This sport is mental sometimes.

Ten most expensive transfers of the 2019 summer window:

The Belgian striker hinted months ago that he wanted to leave Manchester United for Italy, and he got his desired move to to Inter Milan in August just before the start of the Premier League season. Lukaku has had a good start to life in Serie A, on the pitch at least, after scoring twice in his opening two games for the club.

The former Chelsea player had to endure racist abuse in his second appearance for Inter as boos and monkey chants rained down from the Cagliari fans after he scored the winning goal from the penalty spot. To make matters worse, his club’s own fans excused the behaviour in an open letter to the forward.

The right-back is only 25-years-old, but he has already accumulated well over a hundred million pounds in transfer fees. Cancelo, who can also play on the right-wing and at left-back, will be looking to add an English league title to the ones he has picked up in Portugal and Italy.

Judging by his quick assimilation into the Manchester City starting line-up and Pep Guardiola’s glowing praise, the €63m used to sign Rodri will turn out ot be money well spent. Brought in as a replacement for the imperious Fernandinho, the former Atletico Madrid midfielder already looks like he could be one of the signings of the season.

The perfect Fernandinho replacement for #ManCity?

Here’s how their stats match up from last season… ? pic.twitter.com/xHavSyvkhM

After lighting up last season’s Champions League with his impressive displays for Ajax, Frenkie de Jong was named Uefa’s Midfielder of the Year for 2019. The Dutchman is an exquisite passer and mover of the ball, but he is also adept at defending.

Barcelona are hoping he is the long-term replacement for Xavi, arguably their greatest midfielder ever.

The Ivorian winger ripped up Ligue 1 last season after contributing an astonishing 22 goals and 11 assists for Lille in the league last season, helping the club finish second in the table. That was enough to convince Arsenal, usually so stingy in the transfer market, to part with over 70 million pounds this summer.

Bayern Munich were a very solid team at the back last year, but that hasn’t stopped them upgrading in defence. Out went Mats Hummels, in comes Lucas Hernandez. The World Cup-winning defender can play at centre-back and left-back.

The Dutchman has had a tough start to life in Italy, putting in a poor performance during Juventus’ topsy turvy 4-3 win over Napoli, but there is no doubting Matthijs de Ligt has the qualities to be one of the best defenders in world football.

The debate over whether or not Harry Maguire is really worth the transfer fee Man United paid for him will continue until the end of the season, and perhaps beyond, but the former Leicester City has already made his new team look far more competent at the back. That’s no mean feat considering how the Red Devils fared for much of last season.

The Englishman rose to prominence following his performances at the 2018 World Cup in Russia, earning the moniker ‘Slabhead’ from Jamie Vardy for his ability to head the ball, but he is also an accomplished passer.

For years Eden Hazard and Real Madrid seemed destined for each other, but the timing was never quite right — until this summer. Madridistas are yet to see their new Belgian superstar in action in a competitive fixture due to a hamstring injury, but once he gets going then he will prove to be a fan favourite with his skills and technique.

Hazard scored 16 goals in the Premier League last season, assisting a further 15 along the way as Chelsea’s main creative outlet. But the question is: Have Los Blancos overpaid for a 28-year-old whose prime is possibly already in the rearview mirror? Only time will tell.

Speaking of overpaying for 28-year-old wide forwards, Barcelona made Antoine Griezmann the fourth most expensive player of all-time this summer.

Now I’m not saying the Frenchman isn’t a fabulous player who will go on to play brilliantly for La Blaugrana, but spending that much on an attacker when you already have Ousmane Dembele, Philippe Coutinho, Luis Suarez and Lionel Messi? And you also need upgrades in defence and midfield? Seems like the money could have been better spent.

At just 19 years of age, Joao Felix became the third most expensive footballer ever. For that kind of fee, you would expect Atletico Madrid to be getting a generational talent.

The Portuguese has gotten off to a good start anyway, providing a goal and an assist in his first three LaLiga games for the Spanish club.