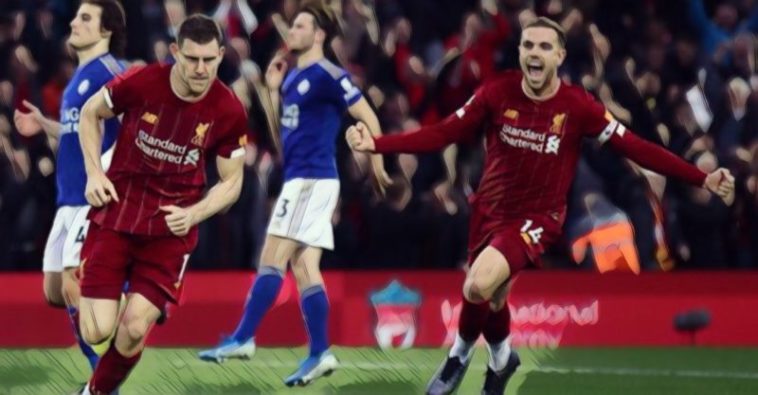 Reds attacker Sadio Mane put the home side ahead after 40 minutes, taking advantage of some lax defending by Jonny Evans to latch onto a James Milner through ball and finish past Kasper Schmeichel.

Brendan Rodgers highly-rated Leicester side would draw level with 10 minutes to go, setting up a grandstand finish, with the 22-year-old midfielder James Maddison’s strike squirming past Liverpool ‘keeper Adrian.

Both teams pushed on in hope of finding a winner, although it looked like Liverpool’s 16 game winning run in the Premier League was about to come to an end as the game entered injury time.

However, Jurgen Klopp’s side were handed the chance to take all three points when Marc Albrighton was controversially adjudged to have taken down Mane in the box, and the ever-reliable James Milner duly obliged, stepping up and hitting home from the spot.

34 – James Milner’s penalty was the 34th time Liverpool have scored a 90th-minute winning goal in a Premier League match – at least nine more than any other side. Resilience. pic.twitter.com/xzFWpJQuz7

Speaking after the game Reds veteran Milner admitted his side had been pushed all the way by the Foxes.

”We had to dig deep and find the points,” Milner told Sky Sports.

”The boys have done it time and time again. There was a few tired legs and it was about getting the result.

”Leicester are a very good side. We knew it was going to be tough. Now we have a break and have to hope people come back from the international break fully fit.”

When asked about how he maintains his composure when taking high-pressure penalties, Milner insisted it’s a case of practice makes perfect.

“Practice is what you need in those moments. You have to just concentrate and stay calm. I was just trying to concentrate. As long as you stay in the moment then you will be fine. Anytime it’s in the last minutes, it is important.”