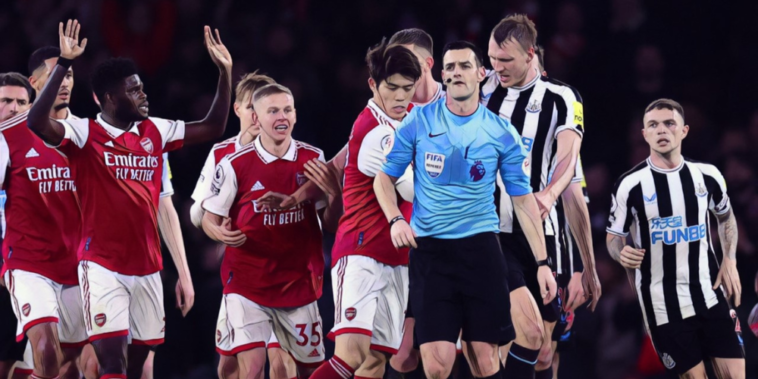 Mikel Arteta was critical of the officiating after Arsenal saw two penalty appeals turned down in the club’s goalless draw with Newcastle.

Arsenal missed the chance to extend their lead at the top of the Premier League table to ten points after being held to a draw at the Emirates.

Arteta’s side were held goalless for the first time since losing to Newcastle in May on a frustrating evening for the home side. The Gunners saw two penalty appeals turned down, the first for a pull on Gabriel and a second for a potential late handball, with Arteta critical of the ‘scandalous’ decisions from referee Andy Madley.

“Extremely proud of my players. The way we played, dominated the game, tried and continued to control the game. We needed that spark in the final third. We had so many situations and then had two scandalous penalties,” Arteta told Sky Sports.

“There were two penalties. It’s very simple. I’m talking about what I’ve seen. It was two scandalous penalties. I’m so proud of the work we have done. I think we lacked an extra touch or movement to finish these chances in this game.”

The Magpies arrived in north London with the Premier League’s best defensive record and again demonstrated their ability to dig in and defend resolutely in a game of few clear-cut chances. Frustrations boiled over on occasion on both sides, with referee Madley issuing nine yellow cards.

Gabriel came closest for the Gunners with a looping header that dropped just wide, while Eddie Nketiah saw a late effort saved by Nick Pope. It was Newcastle who had the best chance of the game however, as Joelinton headed wide when well placed at the back post.

Arteta was asked whether his side needed additions in the January transfer window to boost their title hopes, after failing to make an attacking change from the bench. The club are continuing to pursue a deal for Shakhtar Donetsk winger Mykhaylo Mudryk.

“We had what we had. We have some injuries as well and attacking areas we don’t have that many options but it is what it is. That’s something we always try to do to improve our team and every window is important.”

The result moves Arsenal eight points clear of Manchester City, who take on Chelsea in their game in hand on Thursday evening. Newcastle – who have lost just once in the Premier League so far this season – remain third, ahead of Manchester United on goal difference.