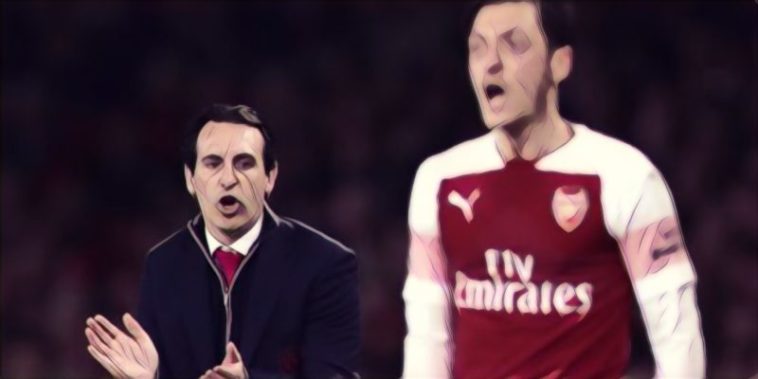 Unai Emery has said that Mesut Özil, along with defender Sokratis, will be ‘rested’ for Thursday’s Europa League tie with Eintracht Frankfurt.

Arsenal fans will be looking to see a reaction from their side’s woeful performance at the weekend where they surrendered a two-goal lead to Watford, although that is hardly surprising considering that they allowed the Hornets to have 23 shots on goal in the second-half alone.

For that game, Unai Emery handed Mesut Özil his first outing of the season, with the former Germany international playing 71 minutes of the game at Vicarage Road before being replaced by Reiss Nelson with the scores still 2-1.

However, despite those being the only minutes he has played since the start of the season a month-and-a-half ago, Unai Emery has decided he will be ‘rested’ in order to be ready for Arsenal’s Premier League outing, a home tie with Aston Villa at the weekend.

"You expect stupid things from them." #afc https://t.co/E5JpujqbSU

“We are playing a lot of matches and I want to use different players, so Sokratis and Mesut are rested for this match,” Emery said in his pre-match press conference.

“After Watford I prefer that Mesut rests for this game and trains to be ready for our next Premier League game. That is my decision.

“The first match he played on Sunday he did well physically — and also gave us his capacity and his skills.

“Now he is ready to be helping us again, but not tomorrow.”

There have been suggestions that the decision to ‘rest’ Özil could be less to do with his physical fitness, and more to do with the continued reaction to the attempted robbery involving himself and Sead Kolasinac over the summer.

Read: Carragher compares Arsenal problems at the back to Liverpool’s early struggles under Klopp

See Also: Top six strikers with the most goals in their first five Premier League games