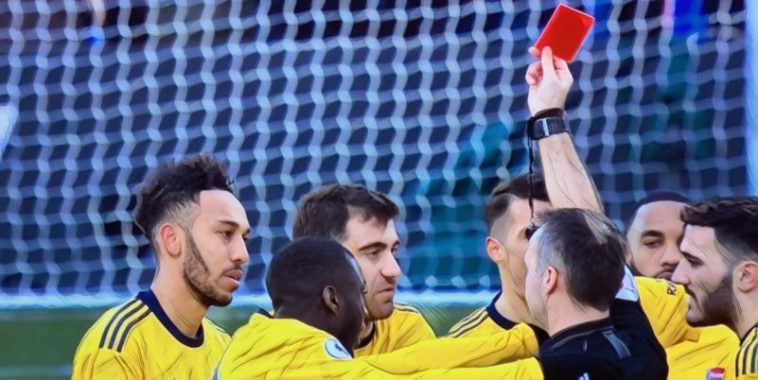 Mikel Arteta admits the loss of Pierre-Emerick Aubameyang to suspension is ‘a massive blow’ following the forward’s red card in Arsenal’s 1-1 draw at Crystal Palace.

The Arsenal captain opened the scoring as the Gunners were held to a 1-1 draw at Selhurst Park, Jordan Ayew’s deflected equaliser sealing a point for the home side as Arteta’s men missed the opportunity to close the gap on the Premier League‘s top four.

A disappointing day was further compounded as Aubameyang was sent off for a lunge on Max Meyer, the Gabon international received a red card after VAR overturned the initial punishment of a caution awarded by referee Paul Tierney.

The 30-year-old is now set to miss three games through suspension, including a huge meeting with London rivals Chelsea at Stamford Bridge on January 21, and Arteta admits the absence of the club’s top scorer will be a huge blow to his plans.

‘We know how important Auba is for the team. Maybe we’re going to lose him for a couple of games.’

Despite the protests of the Arsenal players following the red card, Arteta admitted he had no complaints with the decision after replays showed Aubameyang catching Meyer – who was substituted afterward – high on the ankle.

‘I just watched it and it looked nasty, to be fair,’ Arteta added.

‘Knowing Auba, there’s no intention to make such a tackle.

‘Hopefully he hasn’t been injured and we are sorry for that. The decision was made and we have to accept it.’