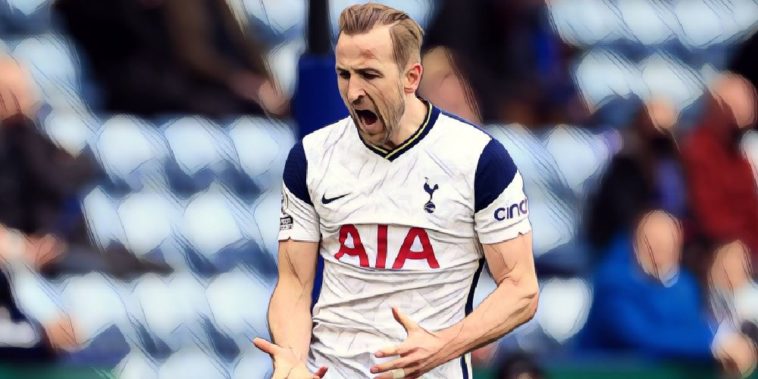 Tottenham Hotspur secured their place in next season’s maiden Europa Conference League, after coming from behind to edge Leicester in a thrilling 4-2 win at the King Power Stadium.

With the likes of Arsenal and Everton waiting to pounce, Spurs simply had to win to try and keep their European qualification hopes alive, yet fell behind early on to their top-four chasing opponents, Jamie Vardy netting from the penalty spot after having been tripped inside the area by Toby Alderweireld.

On what could potentially be his last appearance for the north London club, Harry Kane then drew the visitors level just before half-time, the England captain boosting his Golden Boot hopes with a superbly taken volley that fizzed through the legs of Kasper Schmeichel.

With both side’s European hopes in the balance, it was the Foxes who struck next, Vardy once again netting from the spot, this time after Davinson Sanchez was adjudged to have fouled the Englishman inside the area.

In a topsy-turvy encounter, Spurs then drew themselves level once again, albeit with the aid of FA Cup final hero Schmeichel, the Denmark international turning into his own net after failing to deal with an in-swinging corner from Heung-min Son.

The Foxes agony was then exacerbated with just three minutes to go as substitute Gareth Bale put the visitors ahead for the first-time in the match, the on-loan Welshman all-but extinguishing Leicester’s top-four hopes with a fine finish from just inside the box.

In the dying seconds, Bale then wrapped up the win with a vintage solo effort, driving at the heart of the Leicester defence before tucking home from close range, after his initial effort had struck the post.

That comeback win has ensured a positive end to what’s been an underwhelming campaign on the whole, with interim boss Ryan Mason full of praise for his side’s ‘immense’ display, particularly after the break.

“The second half was outstanding,” he told Sky Sports.

“[We showed] immense qualities – to play, to be brave, to be aggressive, to work for the team.

While the victory made sure that Spurs would finish seventh and secure a place in the inaugural European Conference League, Mason admitted it was not the campaign that they were hoping for and insisted that the club will ‘come back stronger’ next term.

“It’s no secret – we want to finish higher,” he said. “We’re disappointed not to be in the Champions League. We have to respect any European competition we’re in and we will. We’ll have to come back stronger next season.”