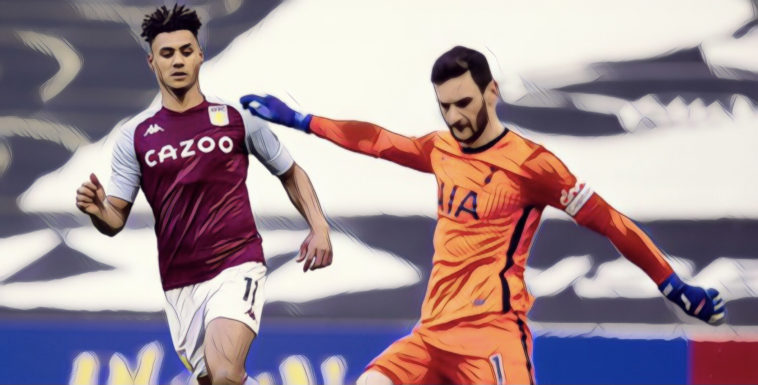 Tottenham Hotspur’s Europa League ambitions were dealt a significant blow, as they slipped to a 2-1 loss at home to Aston Villa on Wednesday night.

Leicester City’s defeat to Chelsea on Tuesday night had already curtailed any slim hopes of Champions League qualification for Spurs, yet they went into the match at the Tottenham Hotspur Stadium knowing a place in Europe’s second tier competition was still up for grabs.

Despite the recent, growing speculation regarding Harry Kane’s future, the England captain retained his place for what was a potential home send-off, while the visitors saw talismanic skipper Jack Grealish make his first league start since early February.

In a lively opening, it was another returning figure who made the breakthrough, Steven Bergwijn – also making his first league start in three months – powering past the Villa backline before unleashing a fierce effort into the roof of the net.

The visitors responded well to going behind and found themselves back in the game soon after, albeit somewhat fortuitously, former Real Madrid man Sergio Reguilon inexplicably slicing into his own net after a relatively innocuous ball-in from Marvelous Nakamba.

The Spurs full-back was once again at fault as Villa took a deserved lead on 39 minutes, the Spaniard seeing his loose pass deflect off Bertrand Traore into the path of Ollie Watkins, who burst into the box before slotting the ball home on his weaker left foot.

Watkins then almost struck a second on the stroke of half-time following yet another Spurs defensive lapse, although his effort was well saved by Hugo Lloris, with the hosts heading in at the interval perhaps a tad fortunate to be just a goal down.

To their credit, Ryan Mason’s side came out much brighter in the second-half and perhaps should have drawn level, goalscorer Bergwijn twice seeing efforts denied by the ever-impressive Emi Martinez, with the former Arsenal stopper also on hand to deny Kane from the angle.

As Spurs probed for an equaliser, the visitors almost extended their lead in the dying minutes, teenage substitute Carney Chukwuemeka seeing his effort agonisingly strike the post to deny him a dream debut goal.

With Villa hanging on for the win, that result has left the north London club risking missing out on a place in next season’s Europa League, leaving interim boss Mason ruing his side’s lack of ‘discipline’ in what was an underwhelming home performance.

“Disappointing. We started the game brightly, unfortunate circumstances for their first goal and they didn’t have to earn the second one either. I didn’t think there was much in the game, just those moments,” Mason told Sky Sports.

”When you make an unfortunate mistake as we did it gives them a good feeling. We tried to break them down but didn’t take those crucial moments.

“It was just about trying to keep our discipline. We lost our shape at times. It was about trying to stay patient and calm. They had pace on the counter and were always a threat. It is a disappointing evening.

“I’ve not looked at the other results yet. We have to pick ourselves up and go again at the weekend. We started the game brightly, the player’s minds were focused on the game.”

The major backdrop to the game was of course the ongoing uncertainty over the future of Harry Kane, although Mason refused to be drawn on his former teammate’s future after the defeat.

“I don’t think at the moment it’s time to answer questions on Harry Kane. Right now we’ve just lost a game in the Premier League. I will speak about the game all day long but not about individuals.”

Spurs round off their Premier League campaign away to top-four chasing Leicester City on Sunday.