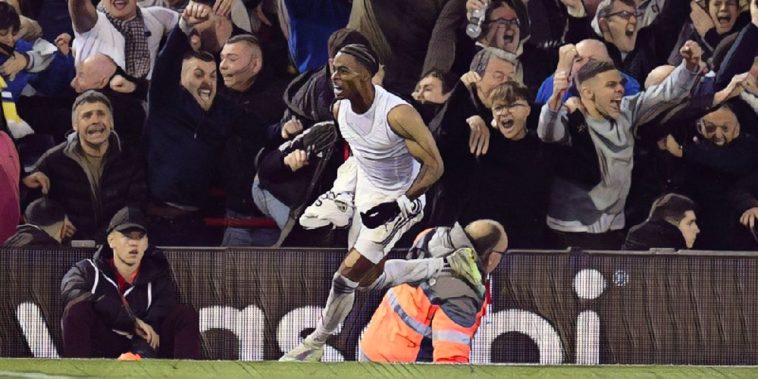 Leeds United netted a 90th minute goal to earn a famous 2-1 win over Liverpool at Anfield to lift them out of the relegation zone.

It was a game between two sides still searching for form, Liverpool having endured an uncharacteristically indifferent start to the campaign to leave them ninth in the table, while Leeds were in the drop zone having picked up just two points from their last eight Premier League games.

Liverpool – and not for the first time this season – got off to the worst possible start, with Joe Gomez enduring an early Halloween nightmare. The Reds defender made a total hash as he played a blind pass back towards Alisson, with Leeds striker, Rodrigo, gleefully collecting the gift and tucking the ball into an empty net from a few yards.

The lead would last just 10 minutes, however, with Andrew Robertson recycling an overhit Trent Alexander-Arnold cross, putting the ball back into the box to find Mohamed Salah who twisted his body to volley home from six yards.

Despite their position in the table, Leeds showed plenty of endeavour and attacking intent which made for a hugely entertaining opening to the game, and the West Yorkshire side came close to retaking the lead as Brenden Aaronson saw his effort hit the bar.

After what was at times a frantic first half, the second saw both sides be a little more cautious perhaps, though it was Leeds that looked the most threatening in the opening stages after the interval, though their final ball was often left lacking.

As for Liverpool, they still seem to be lacking their usual intensity and fluidity, though they still forced Leeds ‘keeper Illan Meslier into some vital saves, particularly to deny Darwin Nunez and Roberto Firmino.

However, as the clock ticked into the 90th minute, Leeds would snatch a late winner. Wilfried Gnonto did well down the left and picked out Patrick Bamford in the box, and while his touch escaped him, the ball fell invitingly to Crysencio Summerville who got his shot off early to beat Alisson and send the away end wild.

The win – which was the club’s first at Anfield since 2001 – moves Leeds up to 15th in the league and will temporarily ease some of the pressure on their manager, Jesse Marsch, and speaking afterwards, the American felt his side ‘stepped up’ and earned their victory.

“It was a good performance, again. It was good that we were able to reward ourselves,” he told Sky Sports. “My feeling is that we shouldn’t be in the situation we’re in, but we are. I’ve tried to stay calm, but I’ve also tried to push. The players have stepped up big today, that’s the reason we were able to get the win.

“You can go through the last eight games and we weren’t second best a lot of the times. We talked about staying strong and finding ways to make plays. It’s a tough place to come and the three points is big for us.

“With our principles, pressing, counter-pressing, ability against the ball and in transition… In the first half we could have had more goals. It felt like we were going to go into half-time at 1-1 which seemed unjust.

“I was focused on us staying disciplined within the match. I’ve believed in this group. We shouldn’t be in this situation if you look at the metrics, but we are. Now we’ve got something like this and now we have to stay strong.

“We’re still in the process of trying to build something that’s new. In our good moments we’re really good, in our bad moments we look too vulnerable and naïve.

“Everybody’s made a big deal about firing me, but the board and I have been unified and we’ve stuck together.”