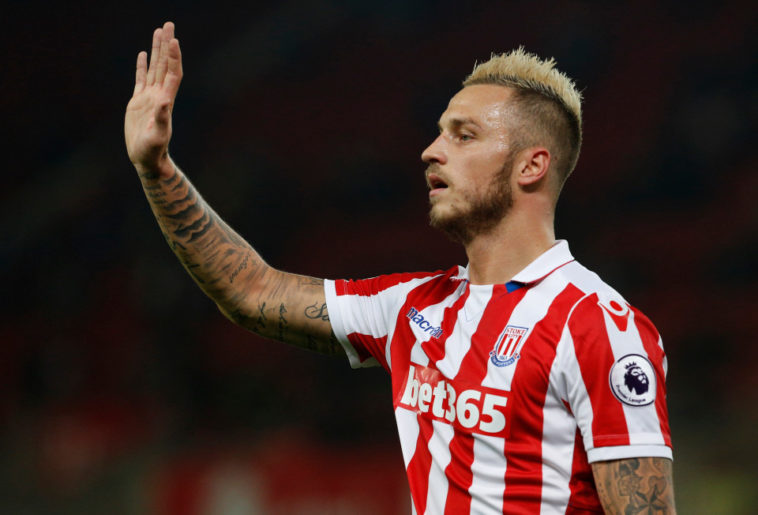 It may not have been his most remarkable season so far this term, but Marko Arnautovic deserves credit as an outstanding winger.

As rumours circulated in the summer of him wanting to leave Stoke, it became apparent to me just how irreplaceable he is to the club.

Arnautovic had an incredibly fragmented youth career in his home country Austria. Between 1995 and 2006 Arnautovic played for five different clubs in and around Vienna. His moves all related to behavioural issues but obviously his talent stood out. In 2006 Arnautovic was signed by Dutch club FC Twente and went on to make 44 appearances, scoring 12 goals.

Jose Mourinho’s Inter Milan showed an interest in Arnautovic and he eventually joined the Milanese club on loan in the 09/10 season. However, he only made there appearances for the club.

Arnautovic became very close with the controversial Mario Balotelli and Mourinho infamously said Arnautovic “is a fantastic person but has the attitude of a child”.

His career seemed destined for failure.

In 2010 Arnautovic joined German outfit Werder Bremen. Arnautovic often impressed in his there seasons with the club but he still wasn’t without controversy. Before even setting foot on the pitch he managed to wind up then captain Torsten Frings who labelled Arnautovic as arrogant.

In 2012 Arnautovic was ruled out for two months after injuring his knee playing with his dog. The last straw at Bremen came in 2013 as Arnautovic and team mate Eljero Elia were caught speeding and suspended by the club.

In September 2013 Arnautovic was one of the first players signed under Mark Hughes’ regime at Stoke City for a fee of just £2 million.

He immediately impressed and got his first Premier League goal with an outstanding free kick at Old Trafford. Arnautovic went on to get four goals and seven assists in his first season at the club. His stats for his second season were less impressive with only one goal and fI’ve assists.

However,  Arnautovic started to deliver on his potential last season, scoring 11 goals and providing six assists.

His best performance came in the 2-0 win over Manchester City. Arnautovic, Shaqiri and Bojan linked up with incredible effect and ran riot. Arnautovic tapped in a Shaqiri cross for the first before smartly finishing a brilliant Shaqiri through ball for the second. He could’ve even had a hat trick if it wasn’t for the top right frame of Joe Hart’s goal.

The unique nature of Arnautovic’s style comes mainly from his stature. At 6”3 and weighing in at 83 kilograms (7 kilos more than his infamously physical captain Ryan Shawcross) Arnautovic certainly stands out on the wing. This allows him to hold off fullbacks and prevent defenders pushing round him to get the ball. Whilst hold up play is nothing new, it’s not often employed by wingers.

Arnautovic also links up very well with Stoke’s other creative players, often finding clever reverse passes in-between opposition defenders. A prime example of this came again in the 15/16 season. It was at home to Leicester as Arnautovic skilfully set up Bojan for the opening goal. In his first season with Stoke his key attributes were his ability to beat a man and provide great crosses with either foot.

But last season his best trait was his late runs inside to score goals. Another striker would occupy the centre backs whilts Arnautovic would makes late bursts into the area.

As a Stoke fan I obviously want him to stay at the club for a very long time. He has right up there as one of our best players for the last few seasons. I may even argue that he has been our best player whilst we have been playing in the Premier League.

In all honesty, I think he is good enough to play for a top six club. He has to be worth somewhere in the region of £15 million. Considering he was signed for £2 million, he’s been one hell of a signing for Stoke City.

So should he stay at Stoke or move on to bigger and better things? Let us know in the comments.