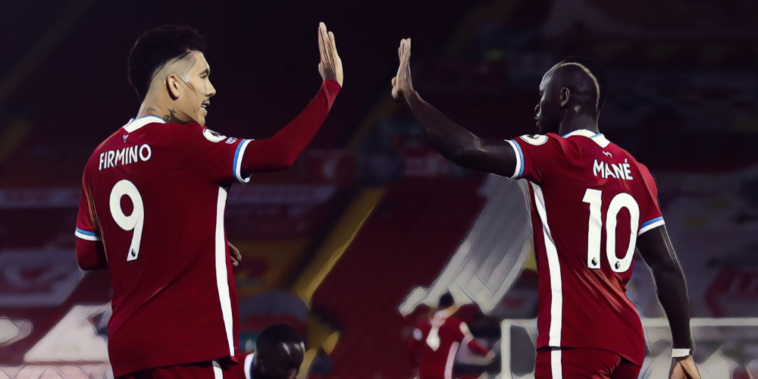 Sadio Mane has given huge praise to Liverpool teammate Roberto Firmino and insists the Brazilian is the key man in the Reds attack.

The front three of Mane, Firmino and Mohamed Salah has been arguably the best in the Premier League, if not in Europe, over the last few years with their link-up play and fluidity integral to Liverpool’s recent success.

Yet, while it’s often the the widemen – Salah and Mane – who receive much of the credit for their goalscoring, Firmino’s contribution can at times go under the radar and the forward has received criticism for his low-scoring output.

During Liverpool’s dominant title win last season, the former Hoffenheim forward scored just nine league goals with the suggestions that the club needed to recruit a more prolific marksman in the summer, current Chelsea striker Timo Werner having been heavily linked with making a move to Anfield.

Although the signing of Diogo Jota did threaten his position at the start of the season, Firmino remains a key part of the side, the Reds’ attacking trio still so impressive at times despite the team’s recent slump.

According to Mane, it is Firmino who really makes everything tick in attack and the Senegal international insisted that his teammate ‘deserves more credit’, despite not often being the man who grabs the headlines.

“He deserves more credit than me and Mo, for sure,” Mane told ESPN Brazil.

“But it is part of football, (people) always seeing the goals scored. But without Bobby, I don’t see me and Mo score as many goals as we have, to be honest.

“He makes everything easier for us. Brazil are just lucky to have Firmino. I have always said to Bobby: ‘You will have to change your nationality and come to Senegal’.

“For me, that would be a dream. I just love him. I think he is my favourite team-mate.”