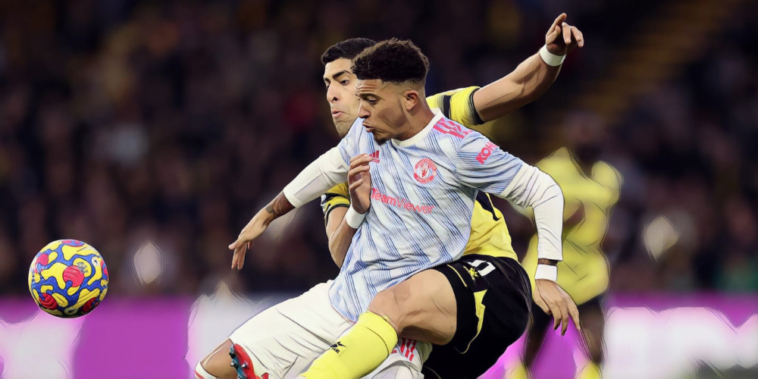 Manchester United host Watford in the Premier League this weekend, with the two teams at opposite ends of the table but equally in need of vital points.

United need a win to maintain their push for Champions League qualification, whilst time is running out for Watford to earn the required points to preserve their Premier League status.

Here’s all you need to know about Saturday’s clash at Old Trafford.

Back-to-back league wins have increased optimism around the Red Devils top four challenge, with performances having been mixed despite a record of just one defeat in 12 league fixtures under Ralf Rangnick.

United also secured a 1-1 draw at Atletico Madrid in the first leg of their last-16 tie on Wednesday, as Anthony Elanga came off the bench to rescue a result that leaves the club with a strong chance of reaching the quarter-finals.

United are fourth in the Premier League at present, but have a wealth of sides looking to catch them with West Ham, Arsenal, Wolves and Tottenham all in the mix for Champions League football.

Jadon Sancho’s improved form and the emergence of Elanga have been positives in recent weeks, whilst Bruno Fernandes scored in successive games for the first time this season after netting in last weekend’s win at Leeds.

Watford remain mired in the Premier League’s relegation places, with Roy Hodgson’s arrival as manager yet to have had a galvanising impact on the squad.

Hodgson’s appointment had led to an increased solidity in the side and a 1-0 win at Aston Villa proved a positive step, but the Hornets’ 4-1 thrashing at home to Crystal Palace in midweek saw familiar flaws exposed.

Watford are four points from safety and time is running out to time to secure enough points, ahead of a tough run in which the club face Champions League hopefuls United, Arsenal and Wolves in successive fixtures.

The Hornets will take encouragement from beating the Red Devils in the reverse fixture at Vicarage Road, but Watford have failed to take a single point from seven previous Premier League visits to Old Trafford.

Watford produced one of the shocks of the season to thrash Manchester United in November, a result which brought an end to Ole Gunnar Solskjaer’s reign with the beaten Red Devils.

Ismaila Sarr twice missed from the spot with a retaken penalty as Watford dominated the opening exchanges, before Josh King opened the scoring for the Hornets against his former side.

Sarr atoned for his earlier error with a second before half-time, before substitute Donny van de Beek pulled one back after converting from Cristiano Ronaldo’s knock-down.

United’s disappointing performance reached a new low as Harry Maguire was sent off for picking up two bookings within seven minutes, as Watford ran riot in the closing stages to secure an emphatic win.

Joao Pedro and Emmanuel Dennis goals added to the Mancunian misery in stoppage-time, sealing one of the most remarkable results in Watford’s Premier League history.

What channel is Manchester United v Watford on?

Manchester United v Watford will not be broadcast live on UK and Irish television.