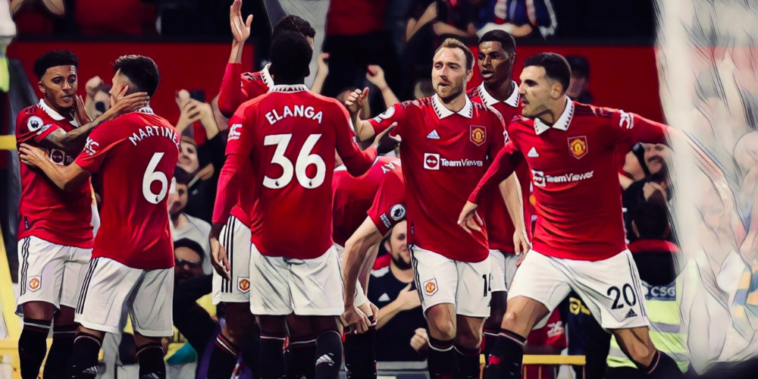 Erik ten Hag is up and running as Manchester United manager, with the Red Devils earning their first win of the Premier League season with an upset of Liverpool at Old Trafford.

It’s now the beaten Reds who are being asked the major questions, following a winless start to the campaign.

Here are five things we learned from Manchester United vs Liverpool.

Jordan Henderson (32) and James Milner (36) started in Liverpool’s midfield three and the veterans struggled on a difficult night at Old Trafford. Against a Manchester United midfield regularly criticised it was Liverpool who were second best. Henderson was poor in possession as his difficult start to the season continued, while Milner was full of bluster – particularly in the direction of Virgil van Dijk – but offered little else.

"There's no doubt Liverpool need more in midfield"@Carra23 breaks down what Liverpool need this season after a tough start to their Premier League campaign 👇 pic.twitter.com/xMlD3ybzWM

The decision to start Fabinho on the bench appeared odd given the huge gaps left in midfield, while Thiago’s absence was felt.

Klopp has spoken of the depth at his disposal, but are Liverpool’s central options of the required standard to challenge for the title this season? Naby Keita and Alex Oxlade-Chamberlain are in the final 12 months of their contracts after stop-start careers with the club, while both Elliott and Curtis Jones need time to develop.

An ineffective midfield failed to get a grip on the game and allowed a below-par defence to be exposed.

Malacia and Martinez make their mark

Lisandro Martinez has had to face serious scrutiny in the early weeks of his Manchester United career, with the centre-back a target for criticism and questions following last weekend’s 4-0 thrashing at Brentford.

Martinez was hauled off at half-time with United four goals down to the Bees, having struggled during a chastening evening in west London. Brentford boss Thomas Frank admitted his team had deliberately attempted to target the Argentine, whose 5ft 9 height has been a talking point since his arrival in the Premier League.

The 24-year-old sent out an emphatic statement with an improved showing against Liverpool, performing excellently alongside Raphael Varane in a partnership that leaves Harry Maguire facing a fight to return to the side.

Martinez blocked more shots (3) than any other player on the pitch and made seven clearances in a performance which showed what he can bring to the Red Devils. Casemiro’s arrival to provide a midfield screen should only improve his game as Erik ten Hag reshapes his side.

Alongside Martinez was Tyrell Malacia at left-back, who on his first Premier League start impressed. Faced with one of the Premier League’s toughest tasks in shackling Mohamed Salah, the summer signing produced a brilliant all-action performance.

The 23-year-old won six duels and made a game-leading five tackles, with Salah’s showing almost anonymous but for his consolation goal. Malacia’s will to win shone and he appears to have the attributes to become a fans’ favourite.

Left side on lock. 🔐 pic.twitter.com/oE70xmpfo4

Marcus Rashford’s showing also offered huge encouragement for Ten Hag, with the forward netting the winning goal and leading the clash for shots (5), shots inside the box (5) and sprints (23).

Erik ten Hag sent a statement with his team selection, leaving both club captain Harry Maguire and Cristiano Ronaldo on the bench.

Ronaldo’s absence came amid continued speculation over the forward’s future, having expressed a desire to leave the club for a Champions League side.

United impressed with a more mobile front three of Marcus Rashford, Jadon Sancho and Anthony Elanga, as the pace and directness of the trio exploited Liverpool’s high defensive line.

Bruno Fernandes tells Eleven Sports: “Cristiano Ronaldo’s future? I may know one thing or another, I won't be the one who will say it”. 🚨🔴🇵🇹 #MUFC

“For now he's a United player, he’s quiet – if he's going to leave or if he won't leave, he will speak soon as he said”. pic.twitter.com/FxuVwInghD

Ten Hag’s stance on Ronaldo was emphasised by the decision to bring on Anthony Martial ahead of the 37-year-old at half-time. Ronaldo’s role was restricted to just a late cameo off the bench as United wound down the clock, in the clearest indication that Ten Hag is happy to move on without the unsettled star.

For the seventh Premier League game in succession, Liverpool conceded first, with slow starts having been behind their nightmare start to the campaign.

On the previous six occasions, the Reds rescued a result, but it is a statistic that will concern Jurgen Klopp following a winless start to the campaign. Liverpool’s slow starts must be addressed if the club are to turn their season around, having already fallen seven points off the pace and five adrift of champions Manchester City.

Liverpool’s start at Old Trafford was dismal, unsettled early as United raced out of the traps. The Merseysiders struggled early on, despite an expected backlash from a wounded side who had began the season with back-to-back defeats.

Klopp’s team were two goals down before registering their first shot on target, an effort which did not come until the 67th minute. It is a statistic that must improve, with Bournemouth (H) up next.

Van Dijk and Alexander-Arnold form a cause for concern

Liverpool’s stuttering start has come with key figures out of sorts and their defence has been exposed in each Premier League fixture to date.

Virgil van Dijk and Trent Alexander-Arnold were criticised during the opening weekend draw at Fulham, with both struggling to deal with the physical threat of Aleksandar Mitrovic. Mitrovic towered over Alexander-Arnold to score the opener at Craven Cottage, before skipping past Van Dijk to win a penalty as the Dutch defender dangled a lazy leg inside the box.

The Liverpool duo have been central to the success of the side in recent seasons, but again endured difficult evenings at Old Trafford.

Van Dijk looked a shadow of his usual self in arguably his worst performance in a Liverpool shirt. He failed to close down Jadon Sancho for the opening goal in a static action that saw him receive both barrels from James Milner.

Virgil van Dijk did not make a successful tackle against Man Utd:

No wonder James Milner was in his ear. 😬 pic.twitter.com/1ahteZYCtE

Alexander-Arnold was also exposed, in a performance which again provided a blueprint for teams to attack down the Liverpool right. At his best, the 23-year-old can be quite brilliant in possession, but this was an ugly performance in which Antony Elanga and Marcus Rashford gave the right-back a torrid time.

Rashford has past experience of giving Alexander-Arnold trouble and did so again in a rejuvenated performance. Klopp needs his big names back to their best and quickly, with Liverpool at risk of falling further behind.

James Milner is saying 'look at me!' 😡@Carra23 "I think Jamie Redknapp and Gary Neville have started something" 😂 pic.twitter.com/P91Y2DUe1t