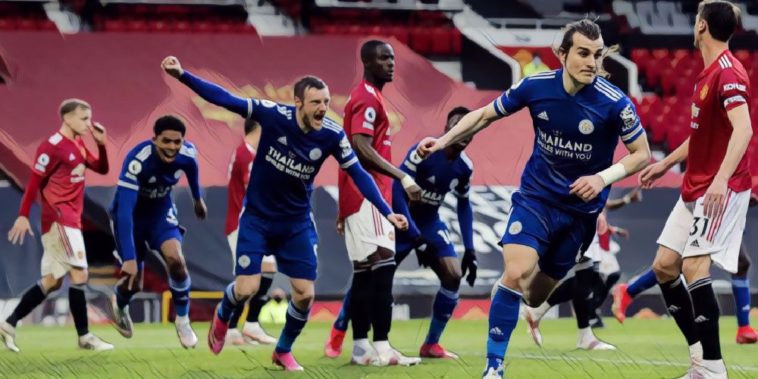 Leicester City earned a 2-1 win at Old Trafford to bolster their Champions League hopes, a result that confirmed Manchester City’s status at 2020/21 champions.

Plenty has been written in recent days about Manchester United’s fixture list, today’s game the Red Devils third in six days, with their rescheduled game against Liverpool still to come on Thursday evening.

With Champions League qualification already in the bag, and in the midst of a ridiculous schedule, Ole Gunnar Solskjaer opted to make 10 changes from the side that beat Aston Villa, with teenagers Amad Diallo and Anthony Elanga making their Premier League debuts.

After a cautious opening period, Leicester would take the lead in the 11th minute with a very well taken goal. Youri Tielemans made a driving run from midfield to find himself in acres of space in the channel down the right. The Belgian fired a cross across the box and while it evaded Jamie Vardy, Luke Thomas followed up and cushioned a fine finish into the top corner from a narrow angle to leave David de Gea with no chance.

Leicester’s lead wouldn’t last long at all, Amad Diallo chased the ball down the right, turning back on himself before laying it off to Mason Greenwood. The England international drove into the box, smartly beating his man before firing low into the bottom corner with his right, the 19-year-old’s seventh goal in his last 10 outings.

2006 – Amad Diallo Traore assisting Mason Greenwood is the first time two teenagers have combined for a Premier League goal since May 2006, when David Wheater set up Adam Johnson for Middlesbrough against Bolton. Dirtbags. #MUNLEI

The two goals were the only two shots that either side would have in what was a dull first period, though Leicester would come out with much more positivity after the break.

David de Gea stayed on his feet to deny an early Kelechi Iheanacho effort, before centre back Caglar Soyuncu headed his side ahead from a 66th minute corner, the Turkish international escaping the marking of substitute Marcus Rashford before sending a bullet header into the back of the net.

Despite sending on the likes of Edinson Cavani and Bruno Fernandes, United rarely looked like getting back into the game, the defeat confirming Manchester City’s fifth Premier League title in the last nine years.

Speaking after the game, Ole Gunnar Solskjaer said he was ‘pleased’ what his second string side produced.

“We started off slow as you might expect because they have not had any time to prepare for the game but after they scored we had nothing to lose. We played some very good stuff and I was pleased with it,” he told BT Sport.

“You see the leadership with Nemanja [Matic]. Mason [Greenwood] looked like a seasoned professional and he is only 19. We have not had too much time to prepare and we went into half-time pleased, but didn’t get out of the traps and they got a goal from a corner that should have been a throw.”

There have been suggestions that the scheduling of United’s fixtures and Solskjaer’s subsequent wholesale changes would bring the integrity of the division and the chase for the top four into doubt, and the Norwegian said that it should never be allowed to happen again.

It was only a matter of time!

Despite still being on course for a second-placed finish for just the second time since Sir Alex Ferguson’s retirement, Solskjaer insists his side must be strengthened in order to close the gap to the newly crowned champions.

“If you want to take up the challenge with them we need to strengthen our squad,” he said.

“Congratulations to them. They have had a fantastic season. I am very pleased with my boys that have made it to the last 10 days with a Manchester City side ahead of us that are lauded as the best in Europe.

“We want to take the next step and it might be that we need a couple more to strengthen the squad.”