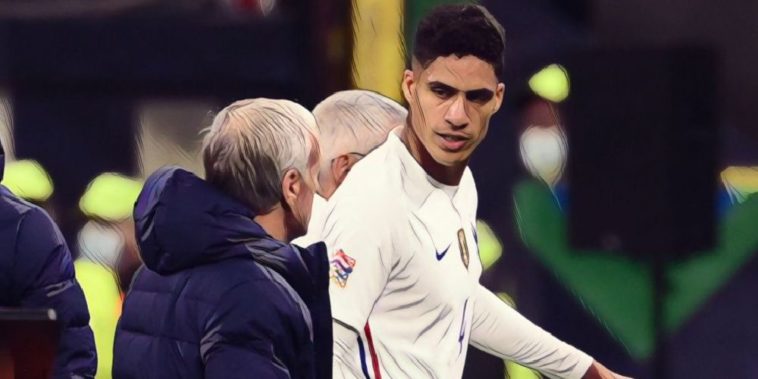 Manchester United have suffered a blow after Raphael Varane was forced off in the Nations League final with injury, ahead of a potentially pivotal run of fixtures for the Red Devils.

The centre-back had played the full 90 minutes in the dramatic, semi-final comeback victory over Belgium on Thursday, before having to be withdrawn just before the break in the showpiece against Spain on Sunday evening.

In his absence, Didier Deschamps’ men once again came from behind to secure victory in an enthralling second-half encounter, as  Karim Benzema’s equaliser and Kylian Mbappe’s controversial winner ensured another major honour for Les Blues, after Mikel Oyarzabal had briefly given Luis Enrique’s side the lead.

Varane was pictured with ice on his right thigh as he watched on from the bench during that eventful second period, with the former Real Madrid man seemingly pulling up while running unopposed, much to the concern of his current club and supporters.

The defender – who has started every Premier League game for United since sitting out the 1-1 draw at Southampton on 22 August – will be assessed on his return to the club’s Carrington training ground later in the week.

The 28-year-old has made a bright start to life at Old Trafford following his much-anticipated move over the summer, having come close to joining the club as a teenager back in 2011, before opting to make the switch to the Spanish capital.

His potential absence from the upcoming games has handed a further headache to manager Ole Gunnar Solskjaer, with centre-back partner Harry Maguire also currently sidelined with injury after limping off in the 1-0 defeat to Aston Villa two weeks ago.

Swedish international Victor Lindelof took his place for the meetings with Villarreal and Everton prior to the international break, with the former Benfica man likely to retain his place for Saturday’s clash with Leicester City, with Eric Bailly and forgotten man Phil Jones in contention should both Maguire and Varane be ruled out.

That encounter with Brendan Rodgers’ side is the first in a tough-looking run for United over the next month or so, with games against Liverpool, Tottenham Hotspur and Manchester City to come in successive league games, as well two vital Champions League battles with Atalanta.

The Red Devils are currently fourth and just two points off leaders Chelsea, albeit having dropped points in their last two league games.