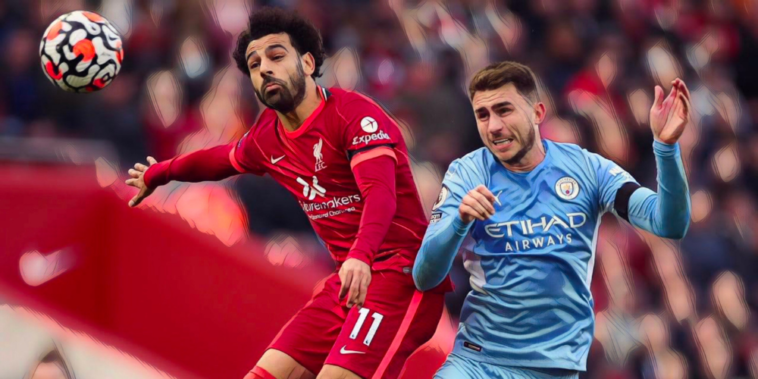 City and Liverpool have battled for supremacy in English football in recent seasons, with the duo boasting arguably the two best managers and squads in world football.

Deciding a combined XI from two talented teams is a difficult task, but ahead of their meeting on Saturday we’ve decided to put together a supremely talented side.

All objections, of which we’re sure there will be many, should be directed to the comments.

Perhaps the two best goalkeepers in the Premier League will face off this weekend, each familiar with the other’s talents given their competition for the number one shirt with Brazil.

Alisson has so often come to Liverpool’s rescue with commanding moments in pressure situations, whilst Ederson remains one of the most unique talents in world football with his elite level of distribution.

Alisson has edged the battle more often than not with the national side, but it is difficult to overlook Ederson’s ability with his feet in a combined side that would no doubt monopolise possession.

A tight call, as many on this team sheet will be, goes Ederson’s way.

Another head-to-head both in our combined team and for international status, Trent Alexander-Arnold and Kyle Walker are two of England’s finest in an embarrassment of riches at right-back.

Walker has won favour with Gareth Southgate and his recovery speed is essential to Manchester City’s game-plan under Pep Guardiola, but it is difficult to look past the obscene output Alexander-Arnold compiles at Liverpool.

Look at that vision from Trent Alexander-Arnold 🎯

An unselfish header from Luis Diaz and Sadio Mane is on hand to make it 2-0 from a few yards out!#UCL pic.twitter.com/UkakQekhnG

It’s now 17 assists in all competitions for the 23-year-old, whose passing range will be key to Liverpool’s hopes this weekend.

Virgil van Dijk’s return has been an undeniable boost to Liverpool’s hopes of regaining the Premier League, with the centre-back stepping seamlessly back into the groove at Anfield after the long-term injury that curtailed his campaign last season.

Van Dijk remains arguably the best central defender in the game and a colossal presence for the Reds, combining domineering defending with leadership and quality in possession.

A good result to take back to Anfield. The focus now turns to Sunday.. pic.twitter.com/RcyhG9AuAv

After shaking off some initial rust, he has been back to his best in recent weeks for a Liverpool side on a run of five consecutive Premier League clean sheets.

Ruben Dias could return to the starting side this weekend, having been named on the bench for Manchester City’s goalless draw at Atletico Madrid in midweek.

Dias has been an excellent signing since arriving at the Etihad from Benfica and was instrumental to the side’s victorious Premier League campaign last season, his performances earning the centre-back the FWA Footballer of the Year accolade.

John Stones and Aymeric Laporte have each enjoyed impressive campaigns with the former outstanding at Atletico, but Dias’ leadership and commanding influence make City a more cohesive unit at the back.

Joao Cancelo’s redefining of full-back positional play makes this one a difficult selection, but the continued consistency of Liverpool’s flying full-backs makes them almost impossible to ignore.

Robertson has been one of the most complete full-backs in world football in recent seasons, mixing determined defensive work with endless energy as he overlaps forward at will.

More than just graft, however, his left foot provides quality delivery and he has 14 assists for the campaign in all competitions this season.

“I think we have got a really tough run in, all games are tough in the Premier League especially when you get to the end bit. But we have some really tough games and we need to try to win them.” #awlive [daily star] pic.twitter.com/nfzlOBwWm4

He will reach 50 assists in the Premier League when he next notches and is now just four short of equalling Leighton Baines’ divisional record for a defender.

The selections on this team sheet do not get any easier, with fans of both teams sure to argue the case for their defensive midfielder to be included.

Rodri has enjoyed huge improvement in the Manchester City midfield this season to become the deep-lying fulcrum of the side, providing an assured base that allows the club’s forward threats to flourish.

Fabinho’s consistency and longevity as one of world football’s best anchors deserves a mention, with the Brazilian having added goals to his game this season with seven for the season in all competitions – having scored just three across the previous three campaigns.

Rodri’s progress earns his selection, however, with the Spaniard outperforming his Liverpool counterpart for pass accuracy, forward passes and aerial duels won per 90 minutes this season, wit their ground duels (3.3 – 3.4) per 90 just favouring Fabinho.

There has been toss-ups for selections all over our combined XI, but Kevin De Bruyne is one name assured of his place in the starting side.

Arguably the Premier League’s finest footballer and a brilliantly complete midfielder, the back-to-back PFA Player of the Year is a talent who Manchester City will hope can be at his match-winning best this weekend.

De Bruyne so often delivers on the big occasions and Guardiola will hope the Belgian can produce another performance of the highest standard this weekend.

Alongside De Bruyne in our combined midfield is Bernardo Silva, a player who Guardiola has routinely lavished with praise given the uniqueness of his talents.

Silva’s mix of industry and invention in the engine room makes him a special footballer when on-song and whilst his performances have dipped since the extraordinary levels of the autumn he will no doubt be selected for the biggest of games.

Guardiola trusts few footballers more than Silva, who on occasion toyed with Liverpool – including one superb solo run – during the league meeting at Anfield this season.

Mohamed Salah could quite conceivably claim the right-wing position in a world combined XI, such has been his devastating effectiveness as an inside forward at Liverpool.

Salah is the league’s leading scorer after another season of prolific goalscoring numbers, scoring 28 goals and providing 11 assists in all competitions for the Reds in 2021/22.

The Egyptian’s numbers have slowed since his phenomenal start to the campaign, but a run of four goals from his last six Premier League games shows even a below-par Salah is the dangerman to City’s chances.

Sadio Mane faces genuine competition for his place for perhaps the first time in his Liverpool career, but the Senegal international remains one of Jurgen Klopp’s most reliable assets.

The 29-year-old has 16 goals in all competitions this season and was named as the AFCON Player fo the Tournament during Senegal’s success in the winter, whilst his hounding of defenders and unpredictability in attacking areas makes him a nightmarish opponent for full-backs.

No player has more Champions League knockout goals (13) since 2017-18 than Sadio Mané ✨ pic.twitter.com/WBv1SpviSs

Jack Grealish and Luis Diaz are both excellent options in their own right, but each have a long way to go to match Mane’s consistent impact on games.

Diogo Jota can count himself unfortunate to miss out after a career-best season, but the captivating talent of Phil Foden deserves inclusion in our combined XI.

Foden is a footballer capable of exquisite moments and has already developed a penchant for deciding the biggest games, the 21-year-old the best player on the pitch when the two teams met at Anfield earlier in the season.

A stunning @PhilFoden strike in the @EmiratesFACup! 💫

Operating as a false nine in our combined XI, his talents could unlock the darting runs of Salah and Mane coming in off the flanks.