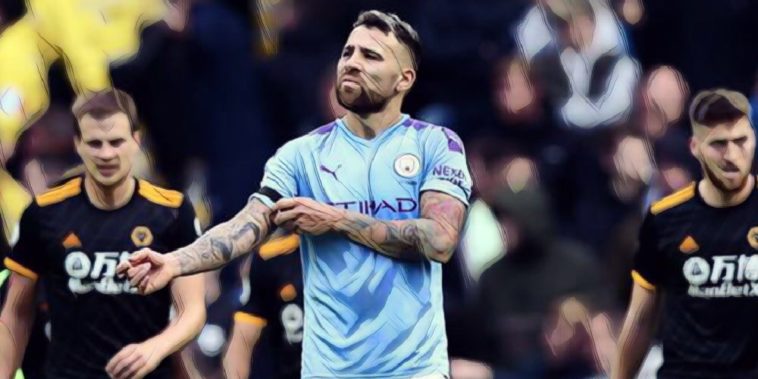 Man City’s defensive instability, lack of a settled backline and inability to stop counter-attacks is hurting the reigning champions this season.

The first weekend of October felt like a big moment in the course of the 2019/20 campaign. There was an end of an era feel to Tottenham Hotspur‘s drubbing at the hands of Brighton, Manchester United reaching a new low with their defeat to Newcastle, and the realisation that this, yes, this year might actually be the year for Liverpool.

That’s because the Reds were able to extend their lead at the top of the Premier League table to a whopping eight points – the biggest lead after eight games since the breakaway. The Merseysiders can thank Wolves for that, after Nuno Espirito Santo’s side defeated Manchester City 2-0 at Eastlands on Sunday.

The result in itself was bad for the defending champions – their first home loss in which they haven’t scored since March 2016 – but it was also illustrative of wider problems that are plaguing Pep Guardiola’s charges. They were reduced to swinging in crosses – 35 of them to be exact – and taking low percentage efforts from outside the box, with just two of their 18 efforts on target.

Wolves are a solid defensive side and were set up well to deny any clear cut chances last weekend. Coupled with the fact that City have found the net 27 times in the preceding seven matches, there isn’t a huge amount to worry about their attack. It’s the other end of the pitch where the problems lie.

Last season City drew twice and lost four times, but this year they’re already halfway towards that total and it’s only October, whereas Liverpool have continued to clock up the wins. They also were only conceding 0.6 goals per game (23 in total), but are now letting in 1.1 per game. At this rate they’ll concede 42 goals, which would be nowhere near good enough to retain the title.

Manchester City have conceded ten shots in the league this season with an xG of 0.4 or greater.

In the entirety of last season, they conceded eleven.

One notable thing about both of Adama Traore’s goals last week was they both came on the counter and right down the defence’s gut. That’s become a familiar theme this season, as Norwich’s second and third goals in their 3-2 win at Carrow Road in September were of that vein.

But why? And where are these problems stemming from?

The most obvious place to start is the absence of Aymeric Laporte. The French defender suffered an injury against Brighton at the end of August and hasn’t been in the side since. In the four league games since then, City have conceded five goals. In this light, it’s obvious that anyone is a step down from Laporte.

Of the club’s remaining natural centre-backs, John Stones has regressed a lot since joining, Nicolas Otamendi has a compulsion for diving in unnecessarily, and Eric Garcia is only 18 years of age.

Fernandinho has stepped in, as he has done before, but it is obvious it is not his natural position. Against Everton his weak attempt at clearing a cross gave the ball straight to Alex Iwobi and his follow-up tackle was abysmal, allowing Seamus Coleman in for a shot from a terrific position.

The eventual goal from Dominic Calvert-Lewin had no material effect on the result, but it was exemplary of their defensive weaknesses; in the four games without Laporte, City have conceded 10 big chances, the fourth most in the league. Although they are adept at not conceding many shots, the ones they do are of a high quality. It’s reminiscent of Liverpool before they signed Alisson, Virgil van Dijk and Fabinho.

Fernandinho’s absence in midfield has also been keenly felt. Although Rodri is a fabulous footballer, he does not fulfil the same role as the Brazilian, who pass, lead transitions and, most importantly, break up opposition attacks before they got close to goal. He would normally do this through cynical fouling, chopping down opposition attackers but get away with it nonetheless.

Rodri has not yet mastered this art and he has been caught out on several occasions, most notably against Norwich and Wolves. The Spaniard also failed to stop the run of Adam Webster against the Seagulls, meaning Laporte had to clean up for him and in turn got himself injured making the tackle. There’s an argument to be made that, despite the plaudits he received last season, Fernandinho is still underrated as there is no one who can replicate what he does to the level at which he performs.

With Oleksandr Zinchenko having to fill in at full-back as well, Man City are left with a mish-mash of a backline that is not hitting the high standards they set for themselves last season. As analytics guru Michael Caley has pointed out recently, City were previously averaging 0.1 xG (expected goals) per shot conceded, but that’s now risen to 0.2. That might not seem like a massive increase, but it’s the difference between being able to defend counter-attacks and not, and they most certainly have not this season.

When you look around at the current state of some of the league’s biggest teams – namely Man United, Spurs and Everton – then City have comparatively little to worry about. They’re still demonstrably one of the two best teams in the country; they just might not be good enough to win the league.

Neville: Liverpool are ‘big favourites’ and Man City ‘are not right’