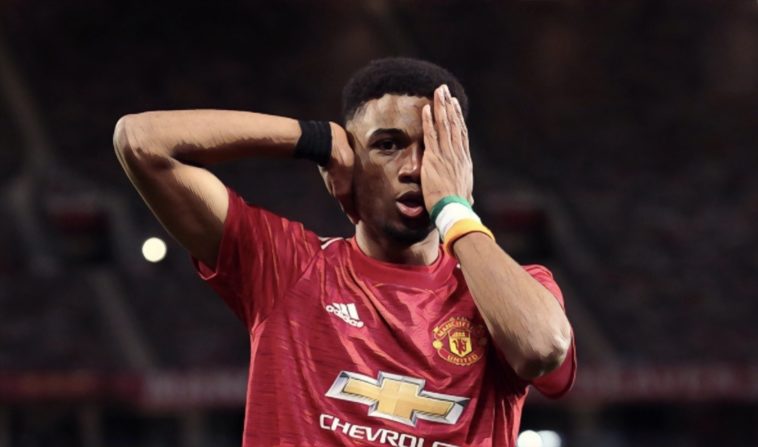 Manchester United are ‘expected’ to loan out promising teenager Amad Diallo this summer, with a number of Premier League and European sides said to be interested.

On what was a hectic transfer deadline day last October, United snapped up the forward from Serie A side Atalanta for a fee believed to be in the region of £37m, with the player ultimately joining the club in January after securing a work permit.

After initially featuring for the club’s under-23 side, the Ivorian international eventually made his senior debut for the Red Devils as a late substitute in the 4-0 Europa League win over Real Sociedad, before netting his first and as yet only goal for the club in the next round against AC Milan.

While that impressive header highlighted his obvious talent, game time remained hard to come by in the latter stages of last season, the youngster racking up just eight appearances for the club in all competitions.

With the arrival of Jadon Sancho likely to further restrict his involvement in the upcoming campaign, it is ‘expected’ that United will allow him to leave on loan this summer, as per Italian football journalist Fabrizio Romano.

Amad Diallo is expected to leave Manchester United on loan this summer. FC Basel and Crystal Palace have been asking for Amad on loan until 2022. 🔴 #MUFC @MatteMoretto

Also Bundesliga & other Premier League clubs in the race. No decision has been made yet.

The 19-year-old is said to be interesting sides across Europe, with Romano naming Swiss side FC Basel and Premier League side Crystal Palace as just two of the sides believed to be keen on a temporary move for the talented teenager.

The report also suggests that a number of Bundesliga sides and English clubs are also tracking the player, although no decision has yet been made over his future, albeit with a loan spell away from the club a likely scenario.

Diallo’s chance of staking his claim for more minutes at Old Trafford has not been helped by the fact that he and teammate Eric Bailly are both currently yet to return to training following their involvement for their country at Tokyo 2020, the two men helping the Elephants reach the quarter-final’s of the competition.

Although the Red Devils agreed to their involvement, it could well have seen the young man slip further down the pecking order, following the promising pre-season of versatile forward Anthony Elanga.

Solskjaer and co have already sent fellow wideman Facundo Pellistri back out on-loan to La Liga side Alaves, with Diallo likely to follow him out the door before the August deadline.