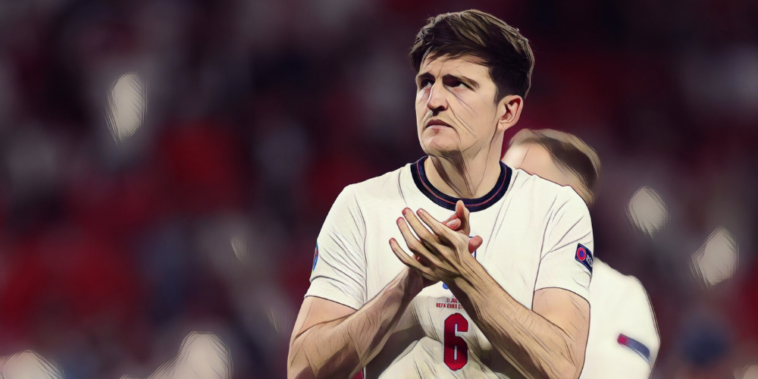 Harry Maguire has revealed the details of the Euro 2020 final ‘stampede’ that has left his father with suspected broken ribs.

England’s first appearance at a major tournament final in 55 years saw large numbers of ticketless fans bid to gain entry into Wembley, with Maguire revealing his father was caught up amongst a crowd of supporters seeking to ‘stampede’ their way in to the Euro 2020 final with Italy.

Maguire senior reportedly found himself floored by a group who pushed through a disabled entrance, with the England international revealing his father was left ‘scared’ following the disappointing scenes and has revealed his relief his own children did not attend Sunday’s showpiece.

“It was not a nice experience — it shook him up. But he was fortunate as every game he has been to he has had my nephew or one of my kids on his shoulders,” he told the Sun.

“My dad was in the stampede. I have not spoken with him too much but I am pleased my kids didn’t go to the game.

Some fans have attempted to storm into Wembley ahead of the Euro 2020 final🔽pic.twitter.com/XyYRRXBFHY

“It was scary — he said he was scared and I don’t want anyone to experience that at a football match.

“I have seen a lot of videos and have spoken to Dad and my family. It was my dad and agent who suffered the most.

“I hope we can learn from this and make sure it doesn’t happen again.”

Maguire has revealed that the injuries sustained by his father amid the incident have left him struggling to breath, before condemning the actions of the supporters who sought entry to Wembley without valid tickets.

“He was struggling with his breathing afterwards because of his ribs, but he’s not one to make a big fuss.

“The experience at Wembley is always amazing, filled with great people and great fans normally. But this time was obviously the final and everyone got overwhelmed and the way some people acted was totally wrong.

“Dad will always support me and go to the games but he will be a little bit more aware of everything going on around. We should all be more aware and learn from it.”

Maguire spoke further on the ‘trouble’ in the stands during the clash with Italy and admits it is a disappointment that the final could not be played without outside incident.

“There was a lot of trouble. It happened where the friends and families were.

“A lot of people got to their seats and there were people sat in their seats. That caused confrontations with people being told to move.

“The main thing is you want it to be an amazing experience and you don’t want anyone to have any bad memories of the final.

“That is the disappointing thing. Things could have been a lot worse but we have to make sure it does not happen again.“