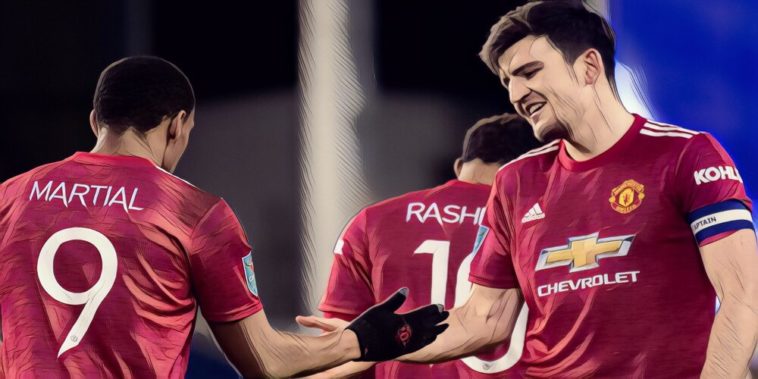 Harry Maguire has demanded Manchester United start to ‘lift trophies’ after securing yet another semi-final place with a 2-0 win at Everton in the Carabao Cup quarter-finals.

Ole Gunnar Solskjaer’s side secured their place in the last four courtesy of a late victory over Everton on Merseyside, Edinson Cavani’s superb strike opening the scoring with just two minutes remaining.

Substitute Anthony Martial added a second on the break in stoppage-time as Everton pushed forward in search of an equaliser, with the Red Devils now set to face Manchester City in a huge derby clash in the last four.

United were beaten in the semi-finals of the FA Cup, League Cup and Europa League last season, and Maguire has now called on his side to improve on that record as they bid to bring long-awaited silverware back to Old Trafford this season.

“We play for Manchester United, we’re expected to win trophies. We got to three semi-finals last year, this year we’ve reached our first semi-final in our first competition,” he told Sky Sports.

“It’s important to reach these big games, but we need to now start winning the big games, like the semi-finals and lift trophies for this club.”

Maguire praised his side’s performance against an Everton side who headed into the clash in fine form, before hailing the impact of summer signing Cavani whose moment of magic ultimately proved the difference.

“I thought it was an excellent performance, we started the game really well. We should have been leading after 20 minutes. It should have been probably out of sight, we had three, four great chances and we’ve got to be a little more clinical.

“But we kept going, we kept digging in. We felt like another chance would come and Edison’s put a great finish in and we’ve managed to seal the win and go through to the next round – which is the most important thing.

“We know he does that, we see it week in, week out in training. He obviously had a little injury which has kept him out from the previous games, so it’s good to have him back.

“You can see what he’s about, he’s been a top striker throughout his career – so it’s great to have him around the place.”