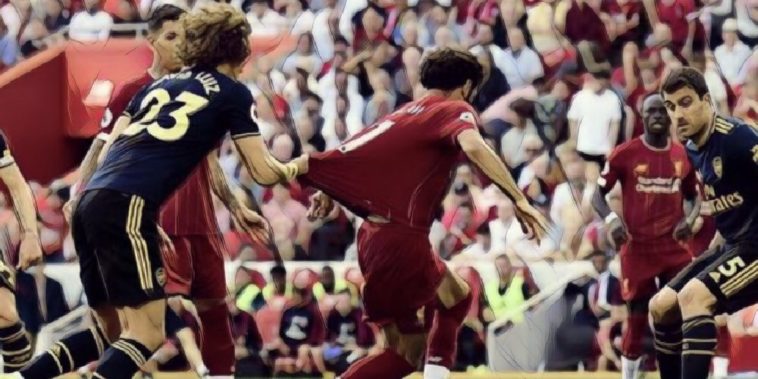 David Luiz has questioned the decision to award Liverpool a penalty in Arsenal’s 3-1 defeat at Anfield on Saturday.

Having gone ahead through a 41st minute Joel Matip header, Liverpool were handed the chance to double their lead four minutes after the break, when new Arsenal signing David Luiz got a handful of Mohamed Salah’s shirt, with referee Anthony Taylor instantly pointing to the spot, giving the Brazilian a yellow card for his troubles.

Salah coolly tucked his spot-kick away, before the Egyptian doubled his tally nine minutes later having made mincemeat of the former Chelsea defender down the Liverpool right.

Speaking after the game though, Luiz didn’t think that his blatant shirt pull warranted a penalty, adding that the yellow card against his name prevented him from challenging Salah for his second goal.

“It was a reflex. I didn’t use any power – I ask Mo Mo (Salah) and he said he didn’t feel anything, that’s why he didn’t go down to the floor,” he told Sky Sports.

“But now we have VAR, you can’t see the power and it’s difficult for the referees. He saw the shirt being pulled, I can’t complain, it is difficult for them. If you play with an extra large shirt it could be a penalty every time. It’s interpretation. If you pull someone with power and you change their trail to the ball it’s different. It was just a reflex.

“He gave me a yellow card and I couldn’t make a foul on Salah for the third goal and put my team in trouble. My game was more difficult after that.”