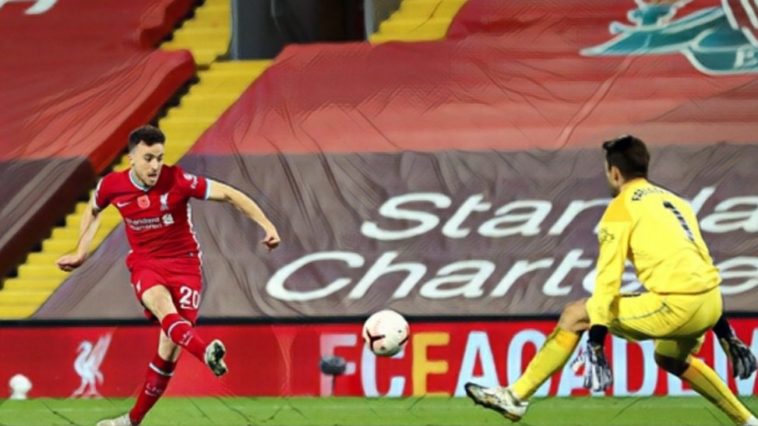 It wasn’t the most stirring performance you will ever have seen Liverpool put in at Anfield, but the home side overcame some stout defending to come away with all three points thanks to goals from Mo Salah and impact substitute Diogo Jota.

The result should not have come as too much of a surprise; in his 16 previous matches at the ground as a manager, David Moyes had yet to taste victory, losing nine and drawing the other seven. But his West Ham United side frustrated the champions for large swathes of this contest, reducing them to half chances and potshots.

Liverpool failed to impress in the first-half, conceding the opening goal in a Premier League match for the second time in a row. After failing to clear their lines in the 10th minute, Pablo Fornals opened the scoring by taking advantage of a weak header from Joe Gomez.

The Reds response was less than encouraging, failing to get a shot off until the 25th minute when Jordan Henderson dragged an effort from the edge of the box just wide. Liverpool’s next two attempts were an Andy Robertson volley that ballooned into the night sky and a Trent Alexander-Arnold free-kick that hit the wall.

The home side were let off the hook, however, five minutes from half-time, winning a soft penalty which Mo Salah converted right down the middle. The Egyptian exaggerated the contact to win the spot kick, but Arthur Masuaku did kick his ankle. It was a scarcely deserved equaliser for the hosts.

West Ham’s stout defending counted for nought, but they did have a glorious chance to retake the lead after the interval. Fornals received the ball in the box and shot towards goal, but it was blocked by the calf of Andy Robertson. Jarrod Bowen looked on in disdain, as a simple pass would have put the Englishman clean through on goal.

Liverpool looked the more likely to get the winner in the second-half, though, and manager Jurgen Klopp threw on Xherdan Shaqiri and Diogo Jota in an effort to do so. The Portuguese thought he had achieved that mission in the 78th minute, but Sadio Mané was deemed to have fouled Angelo Ogbonna in the buildup.

The two substitutes combined just six minutes later to grab the winner, though, as Shaqiri put Jota through on goal to place the ball past West Ham’s goalkeeper. It’s Jota’s third goal in five league appearances for his new club and the Merseyside outfit held on to win 2-1 after going a goal down for the second successive time.

Speaking to Match of the Day after the game, Klopp was naturally happy with the victory, but said his team have “to try everything to win football games” right now.

“It’s not about shining, or flying, or whatever, it’s about hard work… that was absolutely necessary against this opponent. It’s not about the simple stuff because they are too good for that – you need to be cheeky, tricky as well, and we were.

“We had a lot of good football – not 500 chances or whatever but enough. It’s a real challenge for the concentration levels, and we did it. I don’t want to see us in a moment be brilliant because it’s not possible, I want to see us dig in and we did that, and i’m so, so happy.”

Meanwhile, the match winner expressed his delight at grabbing a goal off the bench and making the most of his role in the team.

“The goal means a lot,” Jota told Sky Sports. “Seeing the game on the bench, I’m always thinking about what I can do to change things.

“The most important thing was the win, we just want to keep winning games. With so many games you have to keep moving. Fortunately in the end I got the space. It was a great pass from Shaq.”

Liverpool hit the summit of the table for the first time in the campaign, three points above Everton with a game extra played. The Hammers remain in 13th place after the defeat, having now lost 31 points from winning positions since the beginning of last season.