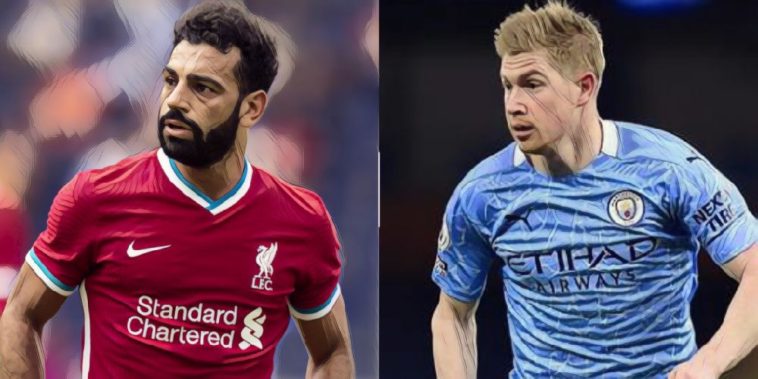 Liverpool meet Manchester City this weekend in a huge clash between the defending champions and current league leaders, having enjoyed a growing rivalry in recent years as the two main contenders for Premier League success.

Jurgen Klopp’s side finished as runners-up to City by just a single point in 2018/19, before bouncing back in style to be crowned Premier League champions after winning a first league title in three decades last season.

Injuries have hindered the Reds’ chances of defending their crown and their hopes could be all but ended should Man City secure victory at Anfield on Sunday, the visitors arriving on Merseyside on the back of a 20-game unbeaten run in all competitions.

As has been the case between these two sides in recent seasons the stakes will once again be high and ahead of the clash we’ve decided to do our best in choosing a combined side, our selections taking ability, form and fitness into consideration.

Amongst the most difficult selection on the team sheet, Alisson is regarded by many as the best goalkeeper in the Premier League but it is difficult to look past Ederson give City’s incredible defensive record this season.

The Brazilian has kept eight consecutive clean sheets and remarkably has more shut-outs than goals conceded so far this season, a remarkable turnaround from the defensive frailties that cost Pep Guardiola’s side last season.

Alisson remains indispensable to Liverpool and the Reds will hope he has recovered from the sickness that saw him missing in midweek, an outstanding all-round goalkeeper but one edged out given City’s solidity at present.

Few would have predicted Joao Cancelo ousting Trent Alexander-Arnold from our combined XI at the start of the season, the full-back having endured a disappointing debut campaign at the Etihad after signing from Juventus.

Cancelo has since emerged as one of the most improved players of the campaign and has been a key figure in Guardiola’s side this season, both rampaging forward down the right and moving inside into midfield to create overloads.

The 26-year-old has been amongst his side’s most creative threats and has taken on added responsibility in the absence of Kevin De Bruyne, with no defender in the division having created more than his 30 chances from open play.

Only two defenders have created 25+ chances from open play in the Premier League so far this season:

The best LB and RB in the division? 👀 pic.twitter.com/PtqCvUgdOE

After record-breaking feats in each of the past two campaigns Alexander-Arnold has struggled to replicate his best performances in contrast, and Liverpool will be hoping the 22-year-old can get back to his best as the Reds struggle for consistent results.

Another player who has enjoyed an incredible renaissance this season, John Stones began the season as fifth-choice centre-back and a seemingly unwanted figure at the Etihad.

Stones deserves huge credit for reviving his fortunes and is now an undisputed starter for City, his partnership with Ruben Dias the perfect blend of steel and silk and one that has laid the foundations for the club’s title charge.

The England international leads the Premier League for pass completion and has helped City to eight clean sheets in their past nine fixtures, a recall to Gareth Southgate’s squad awaiting the defender who appears to be finally fulfilling his potential.

Ruben Dias shapes as one of the easiest selections in this combined XI given him impact at the Etihad, the club-record addition from Benfica having been arguably the signing of the season.

Dias has brought much-needed leadership to the backline and has transformed a previous weakness into a position of huge strength, adapting seamlessly to the demands of the Premier League with his authoritative presence.

The Portugal international’s instant impression has seen his odds slashed to be named as the PFA Player of the Year and few could argue if the centre-back joins an exclusive list of defenders to win the prize on current form.

Dias will face a stern test of his credentials when City make the short distance to Merseyside this weekend, though he has passed each challenge with flying colours to date.

Liverpool’s title-winning side have struggled to replicate their previous performances this season with a host of injuries having damaged their chances of challenging, though Andy Robertson has been amongst the few Reds stars to maintain his levels of consistency.

Robertson has a strong case at being the most complete full-back in world football and has continued to shine down the Liverpool left, leading the Premier League for crosses and touches and registering five assists for the campaign so far.

Lucas Digne is the only defender to have provided more assists than the Scotland captain, who has unquestionably been one of Liverpool’s better performers of late and Robertson remains the best left-back in the division.

Jordan Henderson has been forced to fill in at centre-back for Liverpool given their defensive crisis, but the Reds’ captain earns his inclusion here in his preferred midfield position.

Henderson’s positioning as an auxiliary defender has left Liverpool without their driving force in the centre, his mix of energy and organisation notably missing in his absence.

Liverpool have remarkably lost just two Premier League fixtures with Henderson starting in a central midfield three since October 2017, with both defeats coming in clashes with Manchester City at the Etihad.

The deadline day signing of Ozan Kabak and impending return of Fabinho could see Henderson restored to his natural position this weekend, as the Reds look to continue a run of almost 16 years without defeat to City at Anfield.

The third Manchester City player included after a remarkable resurgence this season, Ilkay Gundogan has gone from maligned midfielder to the free-scoring driving force of the league leader’s title pursuit.

Gundogan’s form has been nothing short of exceptional over the past two months, netting seven goals in 10 league appearances since mid-December in the best goalscoring run of his career.

🗣 "He was one of the best players I ever coached. In the 2012 season he was unbelievable – playing much like he's playing now. Then he had injuries. I'm not surprised at all by his current form."#MCFC 👕 pic.twitter.com/ngmPLFYc7U

The Germany international has assumed greater responsibility in the absence of Kevin De Bruyne and has added a different dynamic to the club’s attack with his intelligent runs from midfield, scoring all forms of goals from close-range tap-ins to spectacular long-range efforts.

Thiago Alcantara’s career on Merseyside has yet to reach the heights expected following his hugely anticipated move from Bayern Munich last summer, but it is difficult to leave out a player widely recognised amongst the best midfielders in world football.

The Spain international is a player for who the game appears to come easy and there have been glimpses of the magic he can provide, sharp turns away from opposition challenges and cutting passes through defensive lines.

Liverpool will hope the 29-year-old can find his best form over the second half of the season after making just six league starts for the campaign so far, this weekend’s blockbuster clash with Manchester City and former manager Guardiola a great opportunity to make his mark.

We’ve chosen a mobile and fleet-footed front three to spearhead our combined side, with Raheem Sterling starting on the right-hand side of the attack.

Sterling has been accused of having a below-par season to date but remains his side’s joint-leading scorer in the Premier League this season, the winger having netted 10 goals and provided nine assists across all competitions in 2020/21.

Those returns are respectable but certainly down on his exploits of previous seasons, but with three goals in his past four there have been signs Sterling is getting back to his best in recent weeks.

The 25-year-old memorably left Liverpool for Manchester City five-and-a-half years ago and would no doubt relish scoring a first goal at Anfield since his departure this weekend.

Another forward perhaps not reaching the same heights as last season but one who remains one of the Premier League’s finest attacking talents, Liverpool will be hoping Sadio Mane has recovered from a muscular injury ahead of Sunday’s clash.

The Senegal international has provided 10 goal involvements in 18 league starts this season and remains captivating when at his very best, a whirlwind of speed, skill and desire to unsettle opponents.

Mane enjoys an excellent record in this fixture with three goals in five games against City at Anfield and the 28-year-old could prove the difference once more if declared fit to return.

Starting through the centre of our forward three is the Premier League’s leading goalscorer, Mohamed Salah continuing to set standards of goalscoring excellence in England’s top division.

Salah has netted 15 league goals for the season so far and stands as the favourite to win the Golden Boot, the Egyptian international aiming for a third accolade in just four seasons with only Thierry Henry and Alan Shearer having previously won the award more than twice.

'One-season wonder' Mohamed Salah has now scored 20+ goals in each of his four campaigns at Liverpool 🇪🇬👑 pic.twitter.com/ZjfhjASzry

The 28-year-old scored from the penalty spot in the reverse fixture and will be Liverpool’s main threat again this time around, though it remains to be seen whether Salah starts on the right of a front three or through the centre as part of a two-man partnership used in recent fixtures.