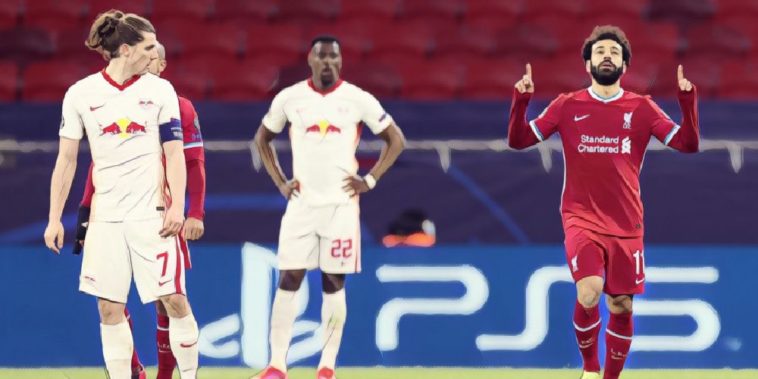 Liverpool put their disappointing domestic form aside to book their place into the Champions League quarter-finals, comfortably knocking RB Leipzig out with a 4-0 aggregate win in Budapest.

Leipzig were uncharacteristically poor in the first leg in the Puskas Arena two weeks ago, but came into the second-leg having enjoyed a perfect record since they last met, their form a complete contrast to that of Liverpool who had lost six of their last eight in all competitions.

Despite it being Leipzig who were in need of goals though following their 2-0 loss last time out, it was Liverpool who looked by far the most likely to score in the opening 45 minutes, the Reds seeing Peter Gulacsi making a number of vital saves before the interval.

Liverpool have looked somewhat lost and devoid of ideas in recent weeks, though looked much more assured in the middle of the park following the return of Fabinho to midfield, the Brazilian flanked by Gini Wijnaldum and Thiago Alcantara.

Following their first-half profligacy, Liverpool did finally take the lead on the night in the 71st minute, Mohamed Salah starting the move in his own half, linking up with Sadio Mane and Diogo Jota, before the Egyptian received the ball back, stepping inside Dayot Upamecano before firing into the bottom right corner.

Three minutes later and Jurgen Klopp’s side put the tie beyond any lingering doubt, substitutes Naby Keita and Divock Origi combining down the right, the Belgian striker putting a cross across the box with Sadio Mane arriving to make it 2-0 on the night and 4-0 on aggregate.

12/13 – In all European competitions under Jürgen Klopp, Liverpool have now progressed from 12 of their 13 two-legged knockout ties (including qualifiers), only failing in last season’s last 16 against Atlético de Madrid. Smiles. pic.twitter.com/CfFFlMaS2O

Leipzig were devastatingly good at times when they beat Manchester United to progress from the group stages, though they never got close to that level and the Bundesliga side failed to mount any kind of a siege on Alisson’s goal, the Brazilian making a save early in the first half and seeing an Alexander Sorloth header come back off the bar, the closest the German’s came.

Speaking afterwards, goalscorer Salah admitted that it was a ‘big result’ for Liverpool given the side’s recent struggles.

“I would love to score more. I am happy I scored today and the team won, that is the most important thing.

“It has been tough in the Premier League, we don’t want it to be tough. It is part of the game. The last couple of years we were winning and flying, this year we have had injuries, it is hard. Hopefully, now we have two or three or four centre backs we can keep winning.”